A History of Clayton State University 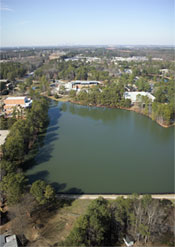 The beginning of the University can be traced to 1965 when the Board of Regents authorized three new junior colleges for the University System, one of which was designated for south metropolitan Atlanta. The Board considered several locations in the region, and chose the present site in Clayton County because of the unique combination of natural beauty and easy access to the then recently-completed Interstate 75. The citizens of Clayton County subsidized the initial construction of the state institution by passing a bond issue for nearly $5 million. Construction of the new campus began in fall 1968, and the doors opened to 942 students less than a year later on September 30, 1969.

In 1981, the University added a technical division offering applied associate degrees and certificates in cooperation with the Georgia Department of Technical and Adult Education. Five years later Clayton State began its baccalaureate mission with programs in business administration and nursing. The institution has continued to add majors at the bachelor’s level since that time. One notable example was the establishment of the Bachelor of Applied Science degree in 1996, as Clayton State emerged as a national leader in promoting opportunities for graduates from applied associate degree programs to “bridge” to bachelor’s degrees with little, if any, loss of credit.

Five years after initiating its baccalaureate programs in 1986, Clayton State opened the doors to the finest small performance facility in the southeastern United States, Spivey Hall. Now, more than 20 years later, Spivey Hall retains its local, national and international reputation by presenting the best in jazz and classical music and an education outreach program that serves thousands of school children from throughout metro Atlanta annually.

Clayton State’s mission commits it to developing an understanding of advanced applications of modern technology. To that end, in January 1998 Clayton State became the first public university in the Southeast and one of the first in the nation to issue notebook computers to all students at all levels in all majors. This “Information Technology Project” (ITP) has transformed the campus and made Clayton State a national pioneer in “ubiquitous computing.” Starting fall 2001, the University entered a new phase called “ITP-Choice,” which maintains the requirement for ubiquitous mobile computing, while giving students the opportunity to purchase notebook computers rather than having the institution supply them.

In a six week period between August and October 2008, the University dedicated three new buildings; the University’s first student housing (Laker Hall), the Student Activities Center and a new building for the AACSB-accredited School of Business. The LAB, a new annex to the Business and Health Sciences Building – devoted to adding more laboratory space for science classes -- opened in January 2011.

The past several years at Clayton State have also been highlighted by the establishment of the nation’s only joint state and federal archives facilities adjacent to campus, the institution of a comprehensive strategic planning process, and the reaffirmation of the University’s accreditation by the Commission on Colleges of the Southern Association of Colleges and Schools (SACS).