When using University resources, we try to implement a system which is cost effective up front, and will last long enough to be an investment and not a hindrance (and another cost) in the near future.

As with many industries, there are established standards to follow.  Being a part of the State of Georgia, we follow the GSFIC Telecommunications Guidelines.

The GSFIC guidelines mostly relies on the relevant industry documentation for standardization, with a few clarifications for the State of Georgia.

For network cables, GSFIC refers to the TIA-568 standard and the BISCI Telecommunications Distribution Manual.

The TIA-568 standard are the specifications a vendor must comply with to label their product as standards compliant.  The BICSI TDMM is a guidebook which pulls together many industry standards, provides the current standards, best practices for implementation, and in some cases advantage and disadvantages where there are choices.

Category 3 cable is a very outdated standard and is only used for analog phone lines as it can not handle modern network speeds.  In the 2007 version of the GSFIC TDM, they specifically disallowed category 3 cabling and required Category 6.  With the Avaya VoIP system running over the network, we do not use Category 3 cable at CSU.

The table below lists standard network speeds, and the cables which support those speeds.

A single network drop is made up of several components.   As the quantity of network drops go up on a job, some of these prices come down due to economies of scale.  Typically we use a rough estimate of $175 per network drop.

When pricing cable by 1000' bulk boxes

Working with several vendors we regularly use on campus and who are consistently low bidders on jobs, we chose the 400 drops going into the New Science Building as a pricing exercise.  We assumed that the runs would average out to half of the maximum distance (50m/150ft).

A bit of history... In 1996, the lower level of the Library was remodeled.  As shown above, Cat5 cabling was pretty new.  Cat5 cabling is what was used, even though at the time 100Mbps connections were just becoming affordable for end-user ports.  This cable has lasted for the last 17 years and is only recently starting to show degradation on some of the longer cables in the building.  If Cat3 had been used, in 2005 when we switched to Voice-over-IP, it would have needed to have been replaced, assuming it had lasted that long and the lack of support for 100Mbps did not obsolete it sooner.

Currently, CSU has a mix between 100Mbps and 1Gbps network ports.  With the exception of unmanaged (ie. dumb) switches, vendors only sell switches capable of operating at 10Mbps/100Mbps/1Gbps, also known as triple speed, so as equipment ages, all equipment will support triple speed.

While not many users will currently max out a 1Gbps connection, 17 years ago, not many users would max out a 10Mbps connection.  Bandwidth usage continues to grow as more graphics and video are transferred.   The next big need-for-speed will be for wireless access points.  The next generation of wireless (802.11ac) will support speeds faster than 1Gbps.  While multiple cables will be used initially to cover faster speed, as the access points increase in speed, a 10Gbps connection will be needed.

References from the BICSI TDMM

From page 1-28 of the TDMM, 12th edition, where they recommend Cat6/6A for better performance

"Network" cables are used for more than just data.  Where there is a network cable, we have sent audio and video data instead of running a display cable.  The better the quality of the cable, the more versatile it is.   On page 1-51  of the TDMM, 12th edition,in relation to running video over twisted-pair cabling, it again recommends Category 6 because of the higher performance.

From page 1-92 of the TDMM, 12th edition, Category 6 is again recommended as an industry best practice 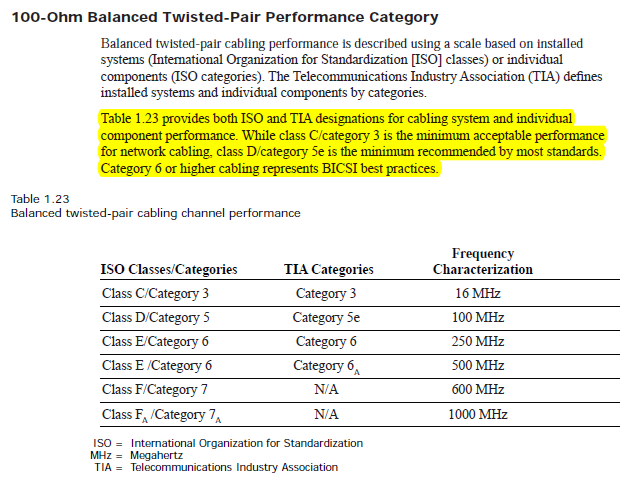 On page 3-3 of the TDMM, 12th edition, it states again that Category 6 is the recommended cable 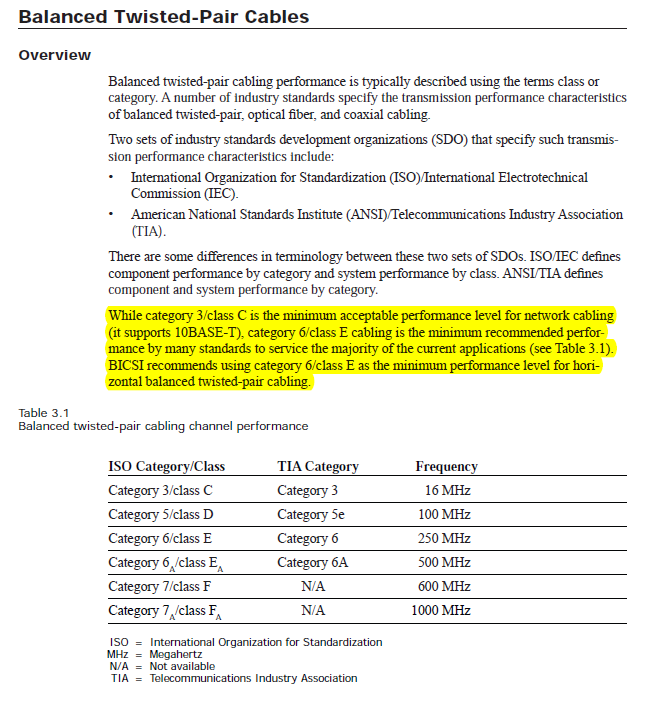 From Appendix A of the TDMM, where it lists the history of category cable, stating that category 6 provides better performance for gigabit connections. 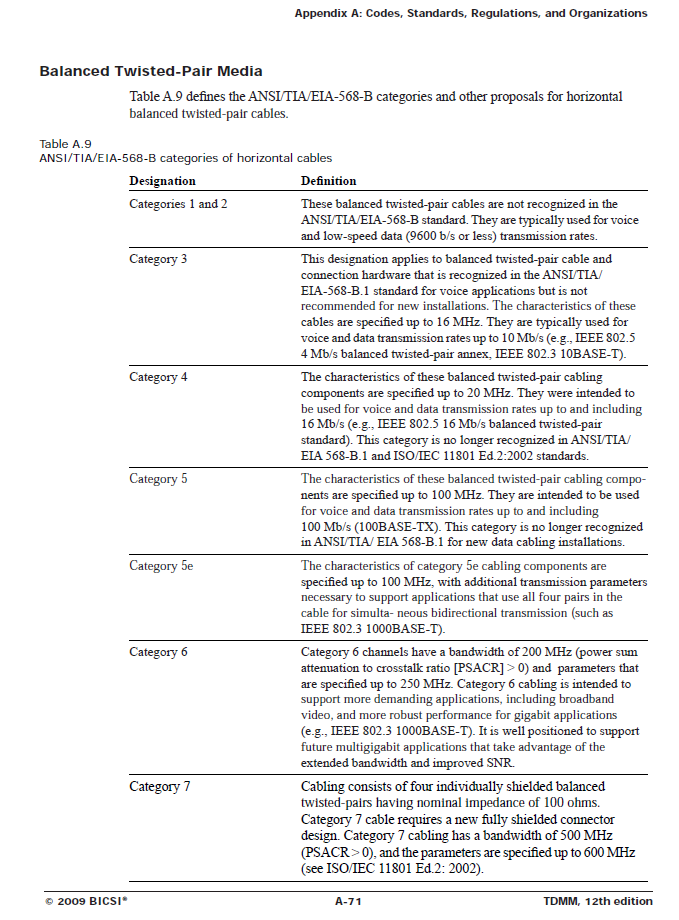 Currently, OITS feels that Category 6 cable is the most cost-effective cable for the campus.  It can handle all of the current applications and is ready for the immediate future (5-10 years).  For many runs it can handle the next speed boost of 10Gbps.  This means that the cabling ran to most offices and classrooms will be ready for future speed increases.

While Category 6A would provide 10Gbps for the full standard 100m distance, we do not feel the drastic price difference makes it currently worthwhile.  For the occasional places where we will need a 10Gbps connection at a long distance, we can run a cable just for that location at a much lower cost.

As shown multiple times Category 6 is recommended over 5e for better performance and is the best practice for new installations.