(November 10, 2020) -40 years ago, a Hungarian mathematician created a three-dimensional puzzle, that has delighted and challenged people over the years who have tried to make the right moves to solve the cube. Nov. 7 marked the 40th anniversary of the Rubik’s Cube. Dr. David Plaxco, assistant professor of Mathematics, discusses the math behind the three-dimensional puzzle, why any position on the cube is only 20 moves away and how the Rubik’s cube can be both frustrating and fun. 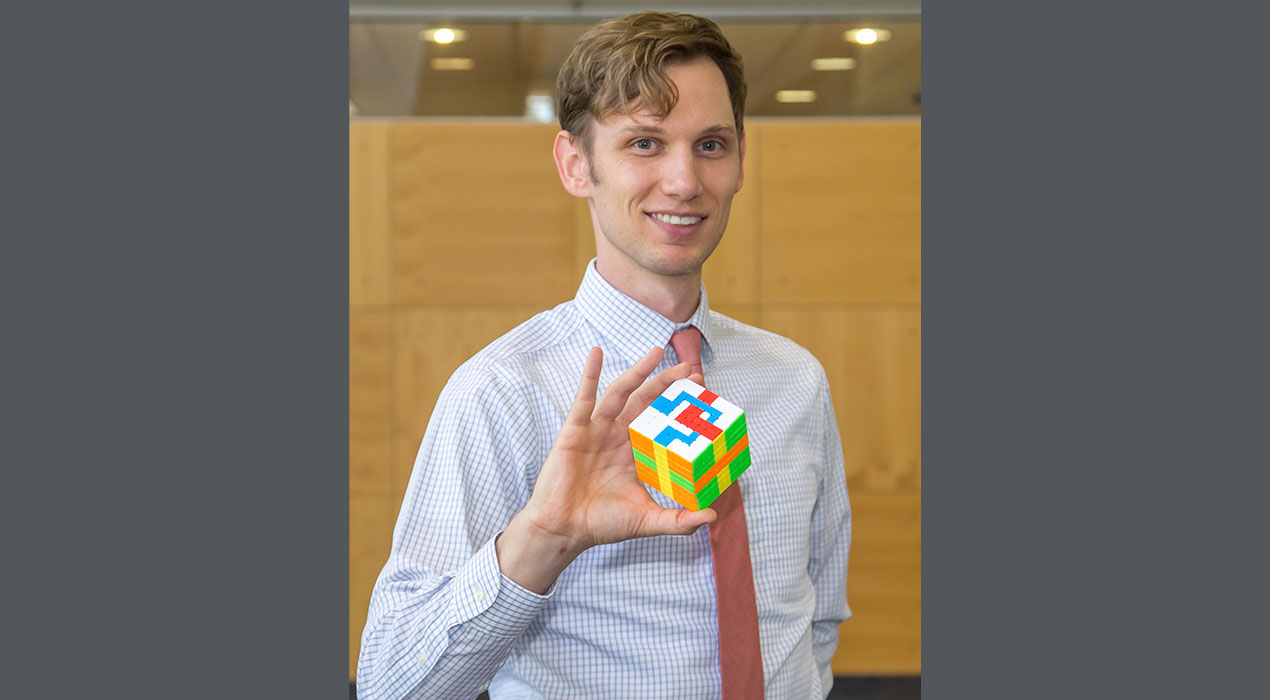 Marketing and Communications: Dr. Plaxco, Saturday was the 40th anniversary of the Rubik’s cube. Named after its founder Erno Rubik, a professor from Budapest in Hungary, it’s widely reported that he designed the cube to help his students understand three-dimensional problems. Can you explain the mathematics behind the cube?

David Plaxco: The primary mathematics behind the Rubik’s cube is called Group Theory, which is part of a branch of mathematics that explores the rules that dictate specific types of structures called groups. A group is a set of objects and an operation on those objects that satisfies certain rules: (1) an identity element under the operation, (2) an inverse element for each element, (3) closure under the operation, and (4) associativity. There are several common groups that folks deal with every day, such as integers under addition (0 is the additive identity, a number’s opposite is its additive inverse, adding two integers results in another integer (closure), integer addition doesn’t change if they are re-grouped (associativity)). The group structure behind the Rubik’s cube is complicated because it is a very large group and different from most mathematical structures that people deal with in their day-to-day lives.

MC: One of the jobs (or challenges depending on who you are) is trying to solve the cube and get each color to line up equally on each side. Apparently it took Erno over a month to solve his first cube. What makes solving the cube so difficult?

Mathematically, what makes the cube so difficult mostly comes down to two things: the group structure dictating moves on the cube is not commutative and is very large. Commutativity is a property of some mathematical structures that allows objects to be operated together in any order without affecting the outcome. For instance, with addition, 2 + 3 = 5 and 3 + 2 = 5, so 2 + 3 = 3 + 2. This is true for all real numbers under addition. But with the Rubik’s cube, twisting layers is not commutative. So, if you do a sequence of moves, the only way to undo that sequence is to trace your steps backward in reverse order. A famous illustration of this is called the socks and shoes principle – if you put on your socks and then put on your shoes, when it comes time to take them off, the shoes have to come off first, then the socks. The other thing that makes the cube difficult to solve is that there are 43,252,003,274,489,856,000 different configurations of the pieces on the cube. That said, there are still techniques that one can learn that will allow them to solve the puzzle in a relatively short amount of time.

MC: For those that can solve it, they can become speed cubers and even go to competition for their talent. How it is possible to get so fast figuring out the cube?

DP: YES! Speed cubing is becoming a very popular sport*. While I am not personally a speed cuber, I do have some insight into how folks can become very fast at the cube. So, first, there are several different approaches to solving the cube and each approach relies on algorithms – sequences of move (often memorized) that result in a desired manipulation on the pieces of the cube. Speed cubers learn a lot of algorithms. They practice identifying specific position patterns and quickly recalling and executing the appropriate algorithm for that situation. Speed cubers also learn to imagine solving some (or all) of the cube mentally before actually turning a layer (this part is pretty amazing). Finally, speed cubing requires dexterity and working to make one’s algorithm identification and execution as fast as possible. World class speed cubers average around 6 or 7 seconds per solve. The current world record for a single solve is 3.47 seconds, held by Yusheng Du.

*We can debate the definition of “sport” 😝. There’s a documentary on Netflix about some of the fastest speed cubers in the world. You can watch that and decide for yourself whether speed cubing should be called a sport.

MC: You’ve said it’s been proven that any position is at most 20 moves away from solved. How is that possible? And how can one determine the moves needed to solve the cube?

DP: This is a really strange (even to me) fact about the Rubik’s cube. Even though the group is so large (see above), no two positions are more than 20 layer moves away from each other. However, there is no established method for figuring out that minimal solution! This is an example of a really interesting phenomenon in mathematics by which mathematicians can assert a fact about the nature of solving a type of problem without actually knowing or producing an exact solution for every scenario.

DP: I think there are different reasons why the cube is compelling for different people and, of course, some people don’t quite enjoy the puzzle. Anyone who has ever tried to solve the Rubik’s cube on their own has probably experienced it as frustrating and enigmatic. I think that mystery does have an appeal to it – to the point that the frustration is pleasant. In my experience, there is a threshold at which frustration may become unpleasant. Usually, that results in a cube with the stickers peeled off.

But for those who continue at it and learn to solve the cube, I think the it provides some comfort that a chaotic-looking thing can become organized and ordered... and then scrambled again! I also think that there is an aesthetic pleasantness to the Rubik’s cube that can convey a sense of connectedness between the pieces, even as they are moving. It’s also not just one thing. It’s a fidget toy and a puzzle, yes, but it’s also a machine and a sculpture and a massive mathematical space to be explored.

MC: Lastly, can you share some of your best tips to solve the Rubik’s cube?

DP: Most people (including me) don’t figure out how to solve the cube on their own. There are several great free tutorials on the internet. If you want to learn on your own, then I would recommend buying a stickerless budget speed cube (Google that phrase, you can find them for under $5). It’s relatively easy to learn how to take these apart and re-assemble them as solved (you can remove a screw hidden under the center of a face). If you’re trying to teach yourself, it’s really helpful to be able to “reset” the cube. Bonus: re-assembling a cube is kind of like solving a jig-saw puzzle, so you get two puzzles in one!