(April 19, 2021) -Mary Kate Chapman is a 2013 alumna of the Masters of Liberal Arts in English degree program. She is also the Associate Executive Director at GUIDE, Inc., which oversees the Georgia Teen Institute program. The alumni office recently sat down with her to discuss her career and the impact she is making in her community. 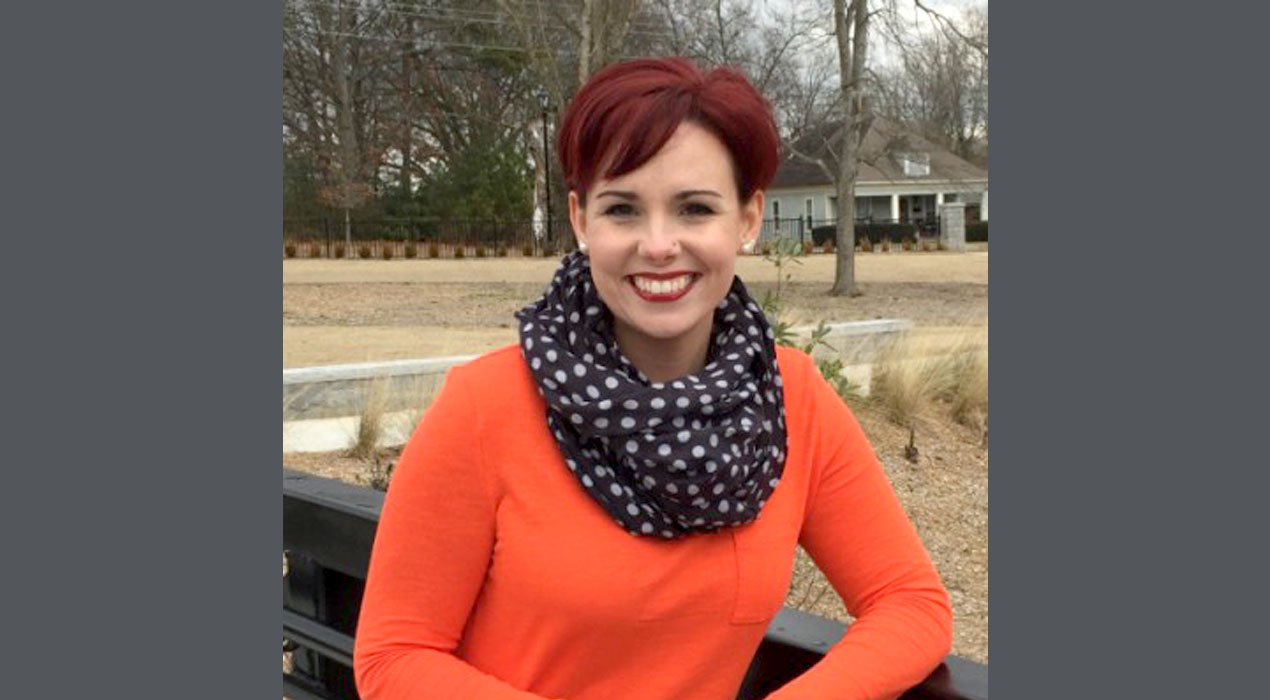 Q: You started your educational journey at other university. Can you talk to us about your time before Clayton State?

A: My dad was actually the chief of police at Kennesaw State University for many, many years and so I didn’t have a choice but to go there. I went to school initially to become a broadcaster of some of some kind either doing meteorology or just doing regular news broadcasting. In the midst of things, I found out after doing some internships and going through that process I’m not a huge fan of the news and am super southern, and everyone said we're going to have to change your voice and since this is my voice changed you can only imagine what it was like before. I decided I was going to go ahead and stick with getting my degree in communications, though, and then just finish that out. I did a lot of contract work over the years and then finally after working for another nonprofit right after Kennesaw, I said yes to join the Georgia Teen Institute full time, and it’ll be ten years in October.

Q: Dive in a little bit for us on what the Georgia Teen Institute is, what it does, what your experience was like when you were there?

Georgia Teen Institute on paper is a youth leadership program where youth action teams across the state come to this one spot, which is at Oxford College. They work on looking at community data to say hey, what's the problem in our community and how can we help? How can we use our voices as youth? When I arrived in Oxford as a student attending the Institute, I remember that feeling of this is where I'm supposed to be for the rest of my life. I can't even explain it other than it was the first time in my life that I felt connected to a group of students who wanted to create positive change. We had this commonality that otherwise I wasn't finding out in the world.

Q: So what did creating positive change look like for you when you were a student? You started the program at 17 years old. How long was the program and what were some of the changes that you know as a 17-year-old you were wanting to make? And what did that look like?

So it's so interesting because the actual program in a non-pandemic year is just a four-day program we do every summer. But what is the key piece of our organization is not necessarily our participants that come to camp, which that is definitely huge, but the way that we connect with our youth staff and young adult staff who work with those participants who attend. We stay engaged with them over the years and that for me was huge. There were adults and older youth who looked at me and said, hey, I see potential in you and how you can change the world. We are technically a substance abuse prevention organization, so we do a lot of work in that realm. But we also work through the lens of positive youth development because we know that when youth are actively engaged in their communities, they are less likely to be engaged in those risky behaviors. I got leadership opportunities that I had never experienced in a high school setting, and it was a way for me to figure out who I was and my leadership style. So while yes, it's prevention. Yes, it's let's not do drugs. More than that, it’s a let's be true leaders.

Q: So you started at Clayton State about the same time you took on your first role at the Georgia Teen Institute. Can you talk a little about how you decided to come to Clayton State?

So I'll never forget that I called Clayton State to ask some questions and they were so nice to me and answered all of my questions and didn't treat me as though they didn't have time for me. I got accepted into the Health Administration program and I'm sitting in a seven-hour Saturday course and at the very end, someone asked when the program would be accredited. And then I was like OK, I didn't realize that this wasn't accredited (at that time), so then my next wonderful experience was I called the admissions office and explained the situation. She said if you want to switch paths, if you want to go a different direction, we will make that happen for you. My passion is English so I said let's do this. It helped me in my work. It's helped me in my writing. The relationships that I made in the program were completely life changing and it all happened the way that it was supposed to happen. It's helped me get hired in a leadership role within my organization.

Q: Can you walk us through your career at Georgia Teen Institute and the different responsibilities you’ve held?

When I started out, basically the work that I did was anything that needed to happen in order to make any kind of programming run. My very first week, I was actually conference staff for one of the conferences that we were running, so I helped with registration. I did all of those things and for a while, probably two or three years. I then started to work directly with our Youth Advisory Board, which is one of the groups that actually comes to Teen Institute, and that’s when I became more of an expert in positive youth development because it really is my love and my passion. I think the next thing that I was in charge of was that I was over Teen Institute. So people will often ask in when you're a summer program director. What do you do the rest of the year? But our contract states that we work with our adult advisers who bring their youth. We provide training so I was doing all of those program details specifically Teen Institute. Then I moved out of that role and was made the director of training and capacity building. Over time, I became the person that if the ball was dropped, it was handed over to me. Finally, once again, my boss saw my worth and made me Associate Executive Director. So it was just a matter of I learned a lot, messed up a lot along the way. And because I am so passionate about this work, not only passionate about working with kids and seeing them successful in really living out their potential, but I am so passionate about working with adults to show them how to do that.

Q: You have mentioned a couple of times that your experiences as a youth were life-changing. Beyond it affecting your career path, can you elaborate on how Georgia Teen Institute has made an impact on your life?

For me, I grew up in a very conservative very single-minded kind of home.  I always felt different and I always felt like there was something in store for me, but I didn't know what it was. All of what GUIDE and the Georgia Teen Institute represents is be you and who you are. If I can be this light for just one other kid in the world, if I could be that for one person like everybody was for me when I went through programming, that's all I need. Kids who say, you know, I decided to go to college because of the experience I had at Teen Institute and because of how you poured into me and you loved me and you showed me support—that is what Teen Institute is. I can't explain it other than to say our organization is pure magic and there's no way on paper it's just a prevention program. You learn it's OK to be a good person who is being a leader within your community and loving people. The program changes people's lives and we stay involved for twenty years and thirty years and forty years because we know the power of community and the power of that support.

Q: Would you be willing to share a story that makes you think, “Yeah, this is why I do this?” Are there any moments you can recall that have had a real impact on you?

Absolutely! When the pandemic started, I had been working from home and we had to decide if we are going to have programming or not and what we're going to do with that. We do a lot of training on team building and team building activities and exercises, and we had to pivot programming completely to work as this team to change everything that we've ever done. We created a whole new program called GTI University where we're running webinars two or three or four weeks. We completely changed things and we did so because we're this united front and we were able to pivot. But as a result, the relationships that we had formed before, they're stronger now. On a more personal level, there's a young man who is so close to my heart. His name is Jamir, and when I think about what Teen Institute is, it is fully everything that is inside of this young man. He has been with Teen Institute working in some capacity for three or four years now on staff. He is twenty years old, and he's in his graduate program now. He is the epitome of what Teen Institute is and of support and loving care. He is a 20-year-old and sometimes will send me encouraging text messages—like today, he said I know it's a hard day for you because you've got this training, but you're going to be great. Who does that at twenty years old? I mean, he's remarkable in that he is the kind of student and person that we're hoping to kind of bring into the world because we need more Jamir's out there. Teen Institute helps promote that.