Enlighten Clayton State: Social media and the appeal of fiction over fact

(February 22, 2021) -The results of 2020 Presidential election were fraught with misinformation as alternative social media accounts and online forums, often fueled by what was reported by former President Donald Trump and his administration, spread untruths about voter fraud and rigged voting machines. 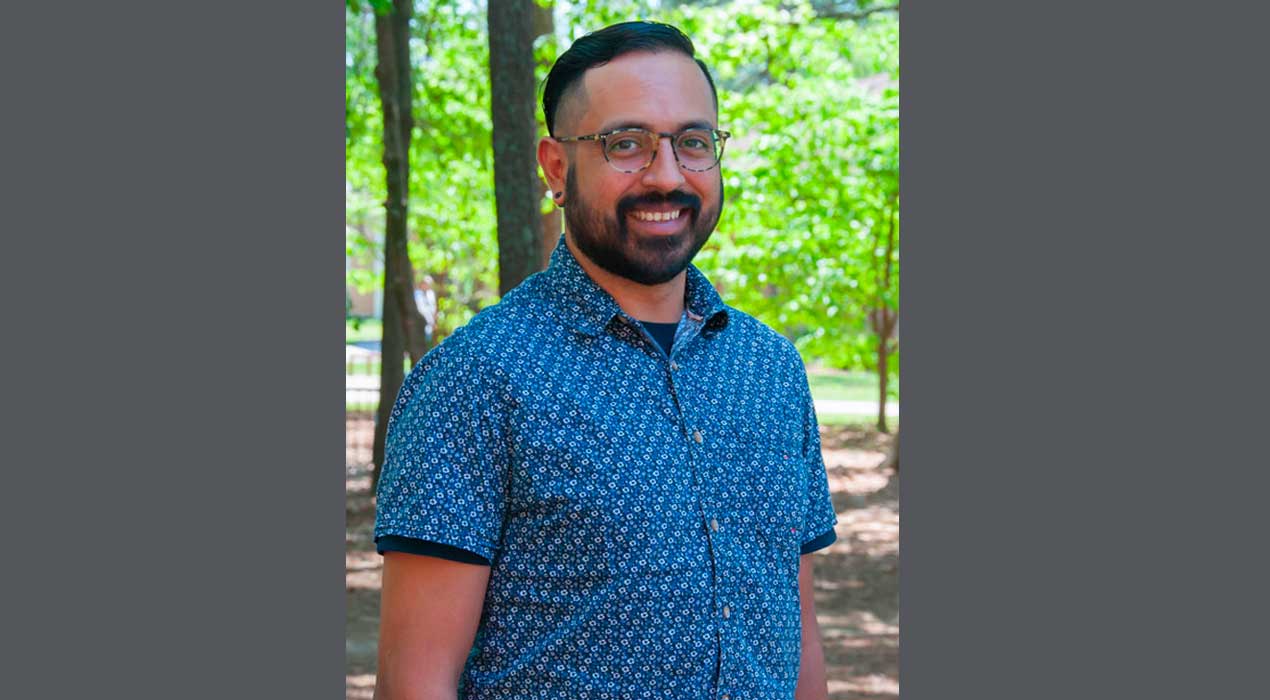 Marketing and Communications: Traditionally, it’s believed a person can develop their political ideology from their environment—parents, friends and other peers. But it seems social media has disrupted that notion. How has social media greatly influenced our personal political beliefs?

David Pena: Social media hasn’t so much disrupted the influence of general political socialization institutions as it has augmented the formation of connections, primarily of the peer group. Social media allows for people to connect based on shared interests. It also allows for the sharing of thoughts, ideas, information and opinions to the public at large. It’s a bit more than that though. Social media doesn’t just allow for people with shared interests to connect, it actually shepherds people into groups that share their interests. Eventually, this constant tailoring of our communities leads to an increased echo chamber. In essence, individual use of social media has helped it to learn and tailor information to our interests thereby shaping our peer groups and group memberships, which in turn further influences our political beliefs. That’s a long way of saying that social media hasn’t usurped peer groups but has augmented them and their relative influence, placing us in more insular communities that validate rather than challenge our beliefs and belief formation process.

MC: Do you think the speed at which information can be spread through social media channels has led to the rise of political misinformation?

DP: The idea of the speed at which misinformation travels compared to the truth is one long discussed in political philosophy. Jonathan Swift wrote in a 1710 piece for The Examiner that “Falsehood flies, and the Truth comes limping after it…” An equally relevant observation made in the previous line in that same piece was that a lie only needs to be believed for a short while to have done its job. False information is a pernicious thing that is difficult to combat. The primary driving factor is not so much speed but breadth. Both falsehoods and truth have access to social media. Keeping in mind that the truth is already behind, the misinformation can spread through these tailored connections and take hold within these insular groups before the truth is disseminated. It’s, again, about these connections and community formations. The insulating nature of these online communities. It makes it harder for accurate information to penetrate into these communities and when it finally does, it’s too late. A prime example can be seen in some of the individuals that took part in the insurrection at the Capitol who are now beginning to realize that they were duped by the former President and others. They are finally realizing reality, but the lie has already done its job. So, while the speed is important, I would argue that it’s the breadth of places for this misinformation to metastasize, and the reinforcing nature of these enclaves, that is of more concern.

MC: Social media is designed to connect individuals with shared interests. But, particularly in the 2020 presidential elections, can a case be made that it was used as a tool to sway voters to believe untruths about voter fraud or election rigging?

DP: Yes, absolutely. In fact, the case was quite convincingly made during the impeachment trial of former President Trump in the US Senate. The idea of social media connecting people who share interests and shrinking the barriers to community are laudable ideas. The majority of people using social media are indeed finding shared communities of interest. However, a small but significant portion of the population (and a more sizable and significant portion of the electoral population) have been ushered into pits of misinformation and distrust. If you recall, Parler, a social media site that was taken offline after the insurrection but has since returned, has been a safe-haven for far-right groups to discuss and organize. It was full of vile rhetoric aimed at perceived “enemies” of America and had rampant misinformation. Furthermore, it was promoted by and joined by many prominent conservative thought leaders. The “Big Lie” was also spread consistently on the site. There is no doubt that social media was used to manipulate people into believing falsehoods about the 2020 election and then, tragically, acting on that misinformation in the form of an insurrection.

MC: During former President Donald Trump’s presidency, social media was a critical tool for him to connect with his constituents and speak directly to them. But his Tweets caused various social media companies to suspend his accounts. Moving forward, what responsibility do elected officials have in ensuring that they speak truthfully to the public?

DP: Elected officials have the same obligation to their constituents and the truth that they have always had. Political considerations have always informed politicians (and people generally) on what to say, when to say it, and how much to say. But the minimum should be a recognition of our shared reality. The question really is which elected officials be willing to do so. This is currently a taller ask for Republicans than for Democrats. The party has moved to punish dissenters that recognize there was not concerted effort to steal the election and that it was free and fair. Quite a few state level GOP organizations have continued to push the “Big Lie” and/or have censured those seen as insufficiently loyal to the former president, amongst other actions. Given that political atmosphere, speaking against partisan orthodoxy could be a big ask indeed for particular members of the GOP. Their duty and office compel them to be truthful, but their short-term political considerations may require a less than truthful approach, to put it mildly.

MC: As the Fourth Estate, how important is it for news media to separate fact from fiction among all of the political noise in order to inform voters and preserve America’s democracy?

DP: Traditional and legacy news organizations have long served as gatekeepers of information. They were once able to shift the course of public debate and, through their focus on particular stories or issues, influence the importance of issues before government to people. As news media shifted to the form of objective reporting we are used to seeing today, the trustworthiness of news became an important part of assessing an organization. It might not come as a shock, but trust in the media not very high, standing at 40% having a great deal or fair amount of trust in the media in a 2020 Gallup survey question on this topic. Couple this with the rise of social media and the citizen journalists and political commentators and it becomes clear that traditional news media has lost much of its ability to set the agenda.

It also might not be a surprise that many people look at media as either liberal or conservative. This is important because this can influence the level of trust that people have in the media. If we look at trust in the media by party, it becomes obvious that this distrust in media is driven primarily by Republicans, with Independents also exhibiting lower levels of trust in the mass media than Democrats. In fact, only 10% of Republican respondents said they had a great deal or fair amount of trust in the media compared to 36% of independents and 73% of Democrats in that same Gallup survey! The effects of the constant misinformation, coupled with distrust in news media (which traditionally works to verify and present documented facts), is exemplified in the reaction to Fox News calling Arizona for President Biden earlier than any other network. The response was for a non-insignificant portion of the viewership to turn to news organizations with an even harder rightward partisan slant.

It must also be noted that quite a few people who work in these conservative news organizations promoted either the idea of a stolen election or frequently had guests that pushed this idea. They also pushed these stories and ideas on social media. So, a large portion of conservative media and thought engaged in the distribution of false information. In fact, several individuals and organizations are the targets of libel/slander suits or are potential targets of such suits.

Yet, the reaction from viewers who are confronted with the truth from these very organizations is to shun them if they do not like the information. Therein lies the problem. While the news organizations that participated in the spread of misinformation obviously share reasonability for the current situation, simply telling the truth now isn’t going to fix the problem. Another reminder of a lie not needing to outlive the truth, only to be ahead of it. The damage is done.

So, while it is vitally important that our public sources of information be fact based, simply providing facts to people is not enough to ensure the preservation of American democracy. Especially when there is someone like the president pushing a false narrative. As for what the solution is, I think the jury is still out on that one. The good news is that there are many brilliant people who are working on that very question.

MC: Facebook and Twitter have now placed disclaimers on posts to indicate if the information has been verified to be true. Will these mechanisms be effective in quashing false political information in the future?

DP: As noted previously, simply providing the truth or a disclaimer is not enough. For some, this is further proof of a conspiracy or coordinated effort to suppress the truth. For others, they simply don’t trust the sources being used to fact check. This was an issue with putting disclaimers on former President Trump’s tweets. People believed President Trump and it provided further evidence and fuel for his attack on the media and “Big Tech” as enemies of the people trying to silence free speech. That’s not to say these efforts do not play a vital role in possibly preventing others from being consumed by falsehoods. Only that the damage already done is going to take more than simply providing the truth.

Enlighten Clayton State invites faculty and staff to share their expertise on various topics. Any views or opinions expressed do not represent Clayton State University.