(November 13, 2018) -Military veterans of various branches, backgrounds, ages, and occupations gathered to celebrate those who have served the United States in the Armed Forces during Clayton State University’s annual Veterans Day Ceremony. 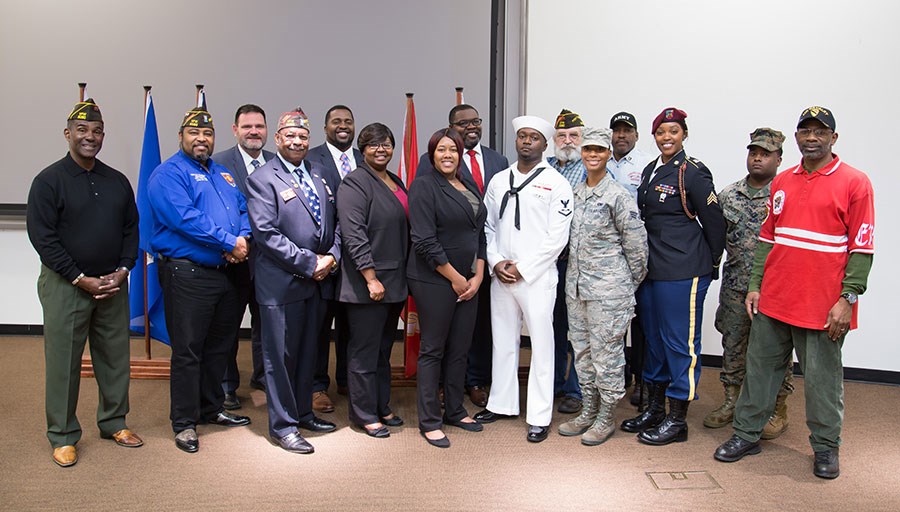 “It is part of our deepest pride that we serve our student veterans here on campus to help them be as successful in the classroom as they have been when they were in service,” said Frank Mervin, Veterans Resource Coordinator.

This year marked the 100th anniversary of Veteran’s Day.

Veterans Day was established in May 26, 1954 by President Dwight D. Eisenhower. The day recognizes the armistice during World War I between Allied nations and Germany. The agreement signaled the end of several major hostilities that were formally ended at the 11th hour of the 11th day of the 11th month of 1918.

The Forest park High School Air Force ROTC presented the flags at the beginning of the ceremony as students from the University’s music department performed the National Anthem.

A moment of silence was held to honor the fallen soldiers from the state of Georgia. Each branch of the military was also recognized as its official song was played as part of the Armed Forces Medley.

Guest speaker Charles A. “Tony” Dobbins, state commander of the Veterans of Foreign Wars Department of Georgia, spoke about the commitment and dedication of men and women in the military who he said have and continue to shoulder the burden of war and serve knowing its necessary for the greater good.

“Even nearly 100 years later, as we gather to reflect on those who fought to preserve the freedom every American enjoys, there are thousands of men and women in our military once again taking up arms against enemies to preserve our way of life,” Dobbins said.

Dobbins, a U.S. Army veteran with more than 20 years of active duty service, said that it is important for generations of Americans to thank those who serve in the Armed Forces and to support their mission of safeguarding America’s interests.

“Time and again, our country has confronted countless challenges, and I know that we will face many more in the days and years ahead. But the citizens of our great nation can rest assured that our values and freedoms are being fearlessly guarded by a greatly determined and highly dedicated military of soldiers, sailors, airmen, marines and coastguardsmen who willingly bear the cost of America’s wars and continue to stand watch over America’s peace,” Dobbins said. “For every single man and woman who has donned a U.S. military uniform, by virtue of her service and sacrifice, today is their day to stand tall and be recognized by a grateful nation.”