A new era for theatre at Clayton State

(March 26, 2019) - A new name and look have marked a new era for Clayton State University’s theatre. After more than a year of construction, The Crescent Theatre has opened, unveiling a state-of-the-art performance venue for students in the Visual and Performing Arts department. 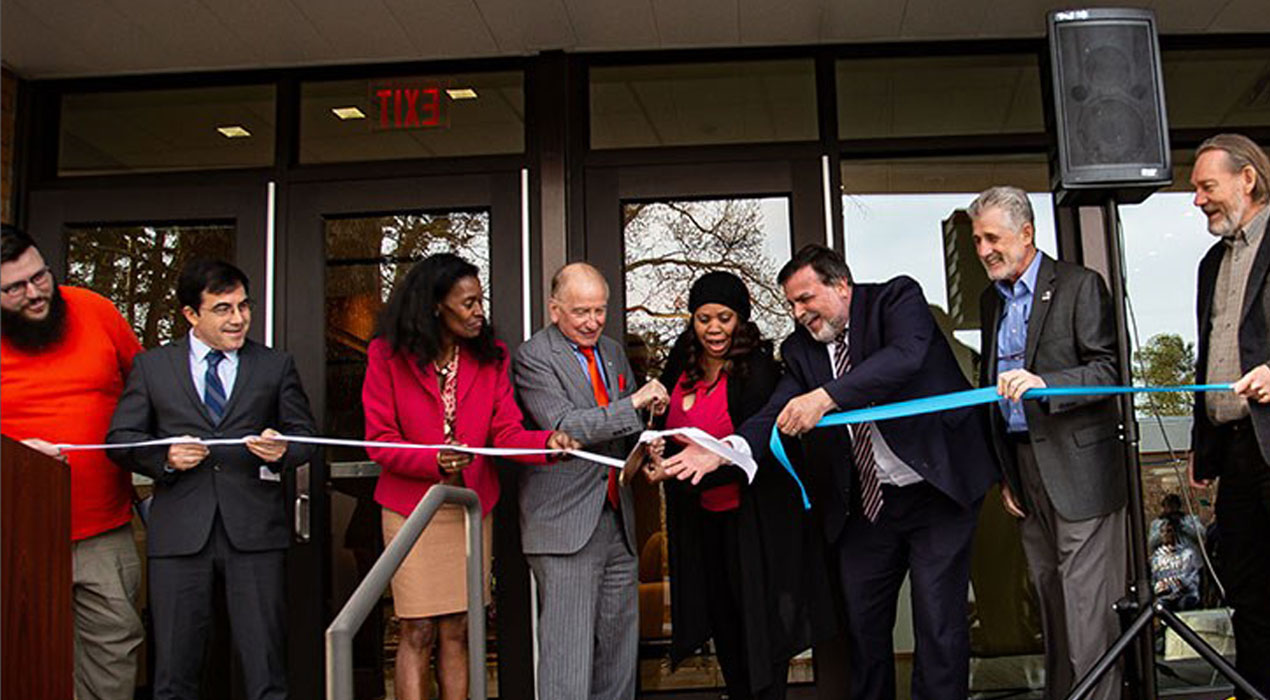 “We are delighted that the campus has expanded, improved, and advanced this wonderful new facility from which various components of the art and work of our students can be seen,” said University President Dr. Tim Hynes.

Clayton State’s theatre department hosted a ribbon cutting for faculty, staff, students, and community partners to celebrate the renovated theatre that was part of the $14.96 million Academic Core Renovation project.

“This renovation will allow our theatre students to create and thrive as never before,” said Dr. Nasser Momayezi, dean of the College of Arts and Sciences, at the March 18 ribbon cutting. “We now have a state-of-the-art facility to meet our growing demand for performance space. I’m thrilled about the positive impact that all this will have on our students.”

The redesign of the theatre came after years of lobbying by the theatre department dating back to the 2009-2010 school year.

“My predecessor, Phillip DePoy, was working on this a couple of years before he left. Before this renovation, we had a new theatre building that was a part of the strategic plan, but due to budgeting and resources, that didn’t happen,” recalls Shontelle Thrash, director of Theatre and associate professor of Theatre and Communication. “While we were hoping and wishing on the renovation, other changes took place in the theatre. We received dressing rooms, the cross-over was created, the HVAC system received an overhaul and some work was done to the stage.”

Those small facelifts to the theatre, however, helped the theatre department deal with an antiquated theatre space that was not fully-outfitted for theatrical productions. Thrash says what is now a green room was just an open space at the time she first began working at Clayton State.

The technical director had to get creative with the limited lighting for the stage and the old speakers. And the actors and crew had to take an unusual approach to getting across the stage without the audience seeing them during scenes.

“The stage didn’t have a cross-over space either,” Thrash explains. A cross-over is a partition that shields the actors and crew to allow them to move from one side of the stage to the other, she says.

“Before we added the cross-over, students had to climb out of the window of the green room and walk around the back of the theatre, outside, to get to the other side of the stage, if they didn’t want to be seen,” she remembers. “But we were able to get creative despite the challenges and create great theatre.”

As construction kicked off last year, the theatre department had to shift a majority of its classes to other spaces, including the auditorium in Arbor Hall at CSU East. But the inconvenience was worth it, Thrash says, as the renovation was a long time coming.

“It was like a dream come true. We’ve been wanting on this for so long and to finally see it happen was indescribable,” she says. “I was even happy to hear the drilling by my office because I knew I was hearing ‘progress’.”

The theatre features new plush seating and carpet to enhance the patron experience. The stage was extended, the roof was replaced, and a catwalk wraps around the theatre to provide flexibility in lighting.

State-of-the-art lighting and audio equipment, as well as touch panel control access was added to support teaching, presentations and performance.

For the actors and crew, a unisex bathroom was built backstage and a washer/dryer connection was added so students can learn dyeing techniques and costumes can be washed and prepared for performances.

A committee to select a new name for the theatre was formed in the fall of 2018. The group, made up of faculty, staff, and students, held a naming contest to get input from the campus on the name. The Crescent Theatre was the perfect fit.

“We wanted a name that would further establish a sense of identity on campus and in the community,” Thrash says. “Our goal is to build on the presence we already have on campus.”

The first production to be performed in the theatre will be The Laramie Project, which explores how the community of Laramie, Wyoming dealt with the brutal murder of Mathew Shepard, a gay college student.

Performances run between March 29 and April 6. Tickets can be purchased at The Crescent Theatre website.