Drew Forde is not afraid to tell you that the classical music experience of today can feel like a museum—old, preserved and full of relics.

The 26-year-old viola player, who goes by his moniker “ThatViolaKid,” believes the time is now for classical music to shake off its stuffy traditions and emerge with fresh sounds and new voices to attract younger mainstream listeners.

And at Spivey Hall this past fall, Forde took the lead in reaching new audiences during a one-week artist residency he conducted that merged classical music with hip-hop and started a conversation about how the two opposing musical genres are actually more similar than they appear. 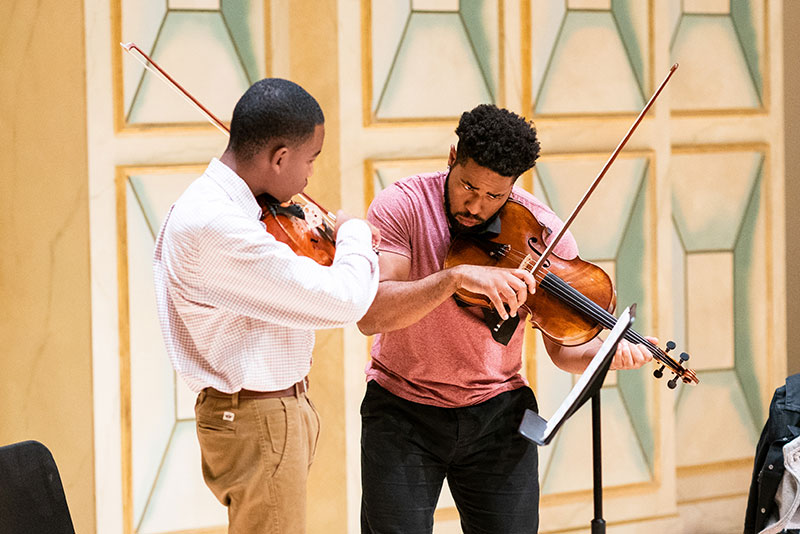 “There is a perception that black people don’t play classical music. Black people don’t play string instruments,” he says. “Even though it was written and canonized by white, European people, it’s more of a human art form and human experience. I want to show people not only can we do this, but [also that] it’s something we can have ownership over.”

During the week of Nov. 10, Forde toured middle schools in Clayton County to educate the students about the viola and classical music. He also hosted a master class with select students from Clayton State and a local high school.

To close out the week, Forde performed two concerts—a young people’s concert and an evening recital entitled #playhomieplay which were open to the community. Connecting with the students of nearby Clayton County Public Schools was especially meaningful for him. Many are African American, and it was important to Forde for those students to see themselves represented in a more traditional musical genre.

“I’ve seen the switch flip in the kids’ eyes,” he says. “The Q-and-A’s tend to be the most important to me. Many of the questions the kids asked were way more advanced than when I was a kid.”

Forde notes that elements of classical music, like most other genres, have derived from sounds frequently found in music from the African diaspora. It makes sense, Forde says, for classical and hip-hop to become allies to create unique melodies.

Take rapper Nas, for example. The Brooklyn native scored a big hit in 2003 with the song “I Can,” which sampled parts of “Für Elise” by Ludwig Van Beethoven.

Or listen to the gritty sound of rap classic “K.I.M.” from EPMD featuring Keith Murray and Redman, which immediately kicks off with a sample of “Symphony No. 40 (Third Movement)” by Wolfgang Amadeus Mozart, backed by a solid bass beat.

“Classical music is not necessarily as syncopated as jazz derivatives of music,” says Forde. “But if you go back in history, there’s a lot of evidence based [on] the prevalence of the pentatonic scale...that this basic system was developed in Africa. And as people spread out, they took those basic principles of rhythms and then they developed their own systems based off the different cultures that spread—[like] China, India. And when you strip [music] down to the pentatonic structure, they all have a lot of commonalities.”

Forde feels it’s important for young people of color to see the connections between genres because it encourages willingness to explore classical sounds. And it’s up to the traditional organizations who are gatekeepers of classical performance to make the genre and performance more attractive to the next generation.

“[Have] accessible concerts, allow people to record with their cell phones; make it more of a fun event.”

Forde discovered his own passion for music in his elementary school days. He took music class, joined his school’s chorus and later began to play percussion. But it was in sixth grade that he learned about string instruments and found his niche.

“It was super different,” he recalls. “I wanted to be unique, and I found that I fell in love with the viola.” 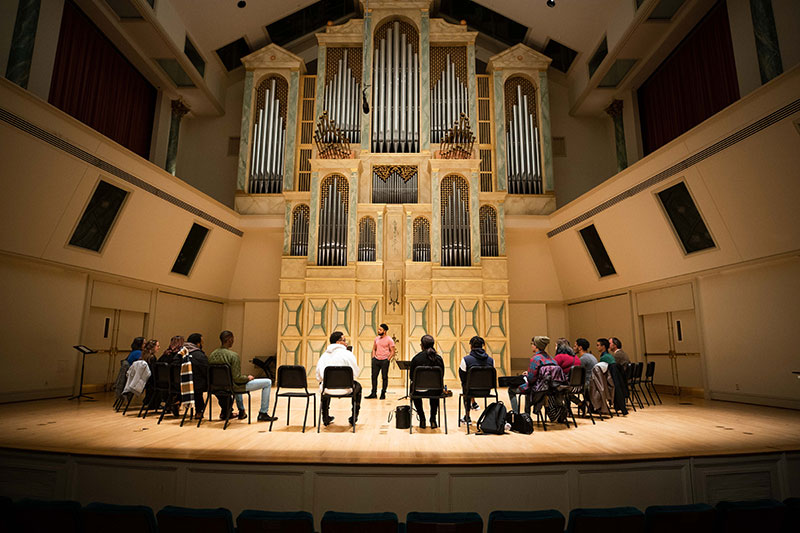 As a teen, he began to focus on chamber music and string quartet in high school. He gained attention for his skills and was even featured on a 2009 CNN segment about the Atlanta Symphony Orchestra’s talent development program.

After high school, Forde attended the Robert McDuffie Center for Strings at Mercer University’s music school, where he earned a Bachelor of Music in 2014. He was one of 10 students awarded a talent-based $20,000 career advancement grant to attend The Julliard School. Forde graduated from the prestigious institution in 2016.

Since then, Forde has traveled the country playing viola as an independent artist. He has shared the stage with celebrities like Alicia Keys, Camila Cabello, Lindsey Stirling, Evanescence and Josh Groban, and he has been featured on several popular video game soundtracks, including Final Fantasy XII Remastered: The Zodiac Age, feature his work.

The key to his success, though, lies in the organic relationship he’s developed with the public through social media. You can often find him on Twitter, Instagram and YouTube offering tips to other musicians, sharing his life experiences and performing classical versions of popular songs. In fact, it was a cover of Adele’s hit “Hello” that he performed with cellist Nathan Chan that propelled him into the public eye. The YouTube video has over 500,000 views.

“We need to utilize social media and the whole digital space to be able to document what’s going on with classical music,” he says.

Forde hopes that his personal journey into the world of classical music and his success as a nontraditional musician breaks down the barriers that separate classical art from contemporary audiences and motivates other young people to be as outward about what they love as much as he is about the viola.

“I just want to perform my music, be my authentic self and plant the seed,” he says. “I just want to give these kids permission to be who they want to be.”