When Clayton Junior College opened its 54-acre campus to 924 students on Tuesday, Sept. 30, 1969, expectations were high for the small institution. It was the 10th junior college operated by the University System of Georgia (USG) during a period of rapid population growth throughout the state.

That year signaled a new era in America— weeks before, Woodstock music festival drew half a million young people to a farm in upstate New York, Richard Nixon was months into his new presidency, the Apollo 11 mission put Neil Armstrong on the moon and the Plymouth Road Runner was named Motor Trend Car of the Year. 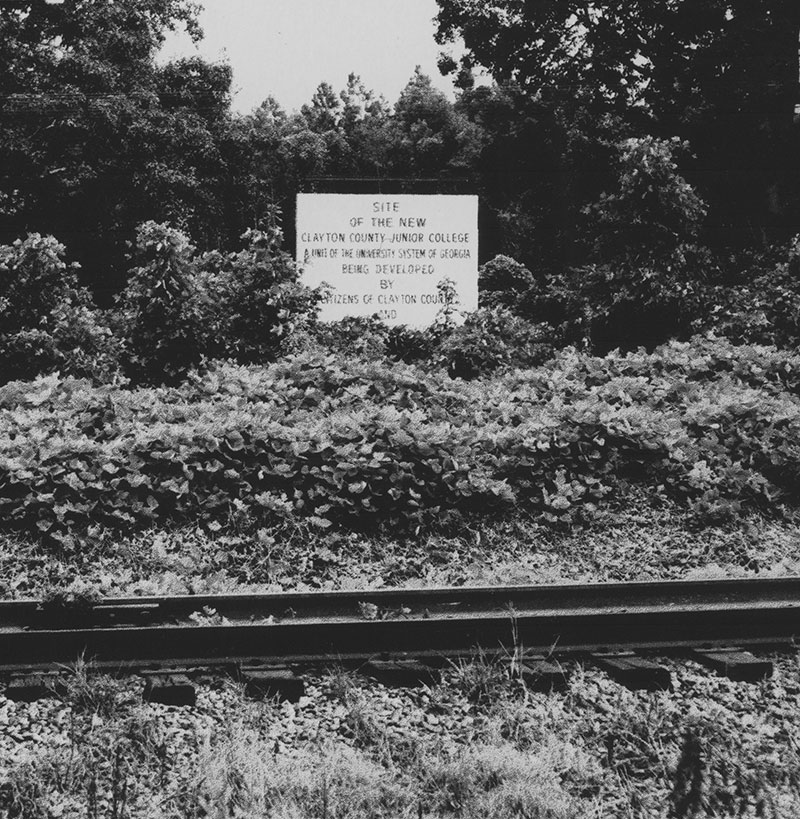 Much like the beginnings of social and cultural change felt across the rest of the country, the opening of Clayton Junior College marked the beginning of greater things to come for south metro Atlanta.

The birth of public higher education in Georgia can be described as “constant evolution,” according to Dr. Thomas Jackson, current heritage communications executive of the USG.

Throughout the University System’s 85-year history, colleges and universities arose from mergers, relocation from one city to another or by evolution of existing schools.

But a successful 1958 lobbying effort by local government officials in Atlanta to set up a separate system for state junior colleges to be established without oversight from the USG, demonstrated the desire of small communities to create their own institutions for post-secondary education. 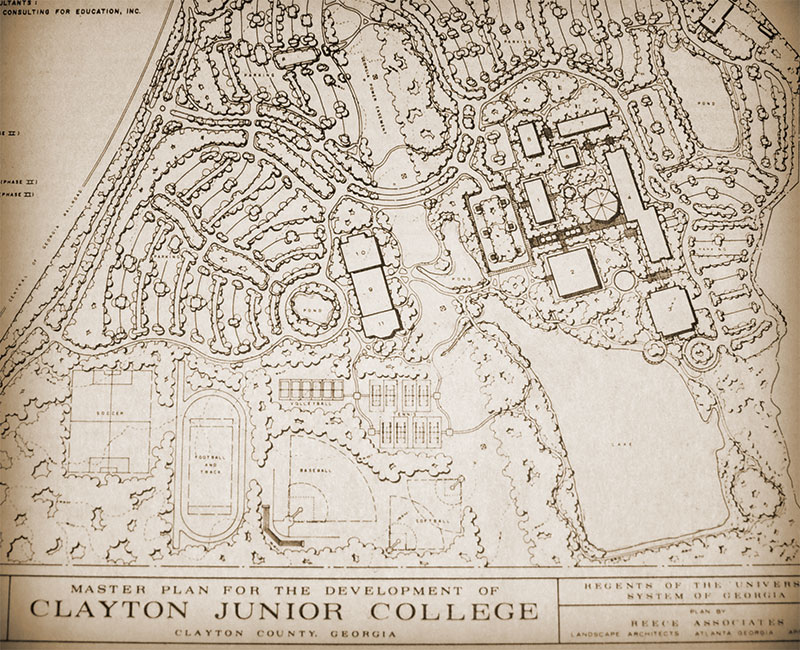 The Junior College Act of 1958 only produced one junior college—Dekalb Community College, which was operated by the DeKalb County Board of Education.

But the University System’s Board of Regents got the message.

“The legislature’s passage of the act was a ‘sharp spur’ to the Board of Regents to expand junior college opportunity,” Jackson notes.

As a result of that political move, the USG took matters into its own hands by establishing junior colleges around the state, including in cities such as Albany, Dalton, Gainesville and Kennesaw in the 1960s, Jackson explains.

“The moves sent the signal that the Board of Regents would mind the state’s junior college needs and no further locally sponsored institutions would be necessary,” Jackson says. “And the south side of metro Atlanta where Clayton State is, is certainly an area that had a population boom going and had the political wherewithal to get a college.”

“The community support for a new college in Clayton County was far superior to other communities with which I had worked.”

Clayton Junior College’s first course catalog explains, “The genesis of the college can be traced to a report issued in 1963 by the Georgia governor’s Commission to Improve Education. The report pointed out the need for additional community junior colleges in Georgia and stated that ‘the comprehensive community junior college is the primary means by which local area and community needs should be met for education beyond high school.’ The Commission recommended that these institutions should be established on the basis of a statewide survey using the best- known criteria.”

Eight Georgia educators and two nationally known consultants conducted the study, and eventually the Board of Regents authorized the establishment of three new junior colleges, including Clayton Junior College.

Published in June 1965, the study noted that the state’s population had swelled from 3.4 million in 1950 to 3.9 million a decade later—an increase of 14.5%—and the number of Georgia residents was projected to continue to rise an additional 31.9% by 1975. Most of the growth happened in six metropolitan areas across the state: Macon, Savannah, Augusta, Columbus, Albany, and of course, Atlanta. 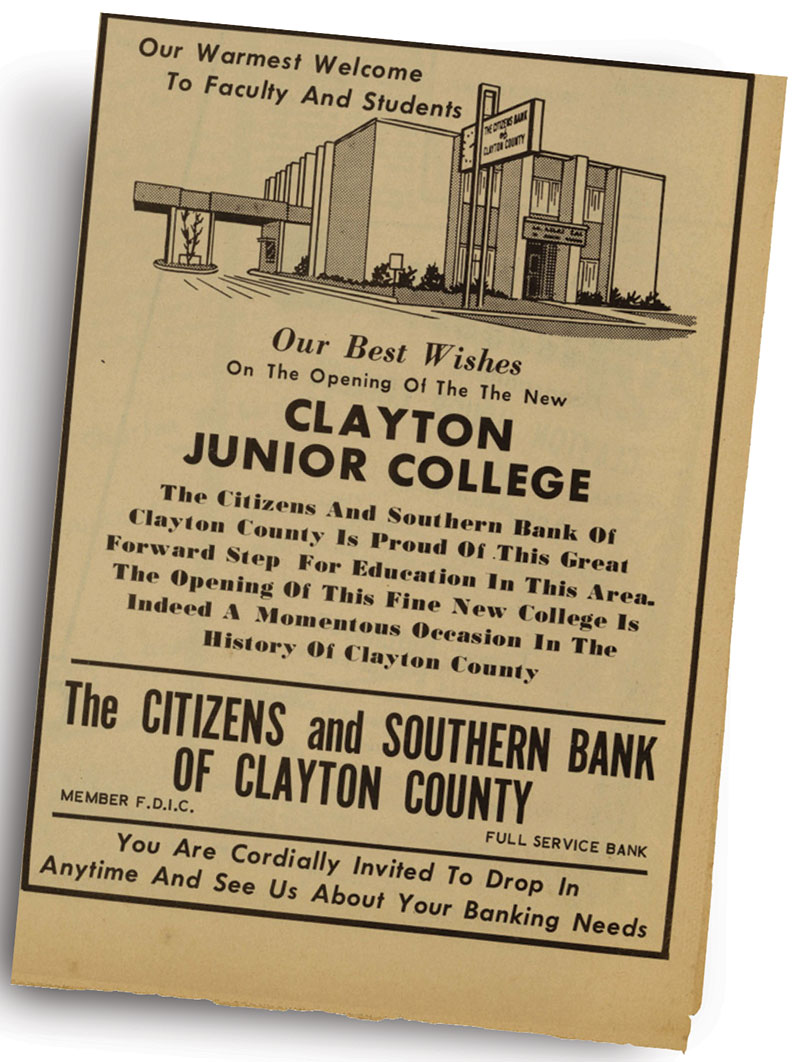 Clayton, Cobb, Fulton, DeKalb and Gwinnett counties were home to nearly a quarter of Georgia’s 18- and 19-year-olds, and the percentage of high school graduates heading to college reached 30% with expectations of increasing. These circumstances demonstrated a clear need for more post-high school education in metropolitan Atlanta.

“Projections reveal that the five-county area of metropolitan Atlanta will experience phenomenal growth in population in the years ahead,” the study said. Estimates for Clayton County indicated the number of 18- to 19-year-olds, slightly more than 1,000 in 1960, would reach about 2,700 within the decade and about 4,700 by 1975.

Based on those numbers, the Board of Regents’ study recommended founding a junior college in Clayton County “as quickly as practical.”

Designed to educate not only county residents but also students commuting from nearby Fayette, Henry and Spalding counties, construction of Clayton Junior College was well under way by February 1969.

“The college extends a welcome sign to all who wish to learn, without regard to age,” the first course catalog reads. “Its programs are adapted to the current and changing needs of a rapidly growing metropolitan environment.”

Indeed, Clayton County, like the rest of Georgia, was growing fast. 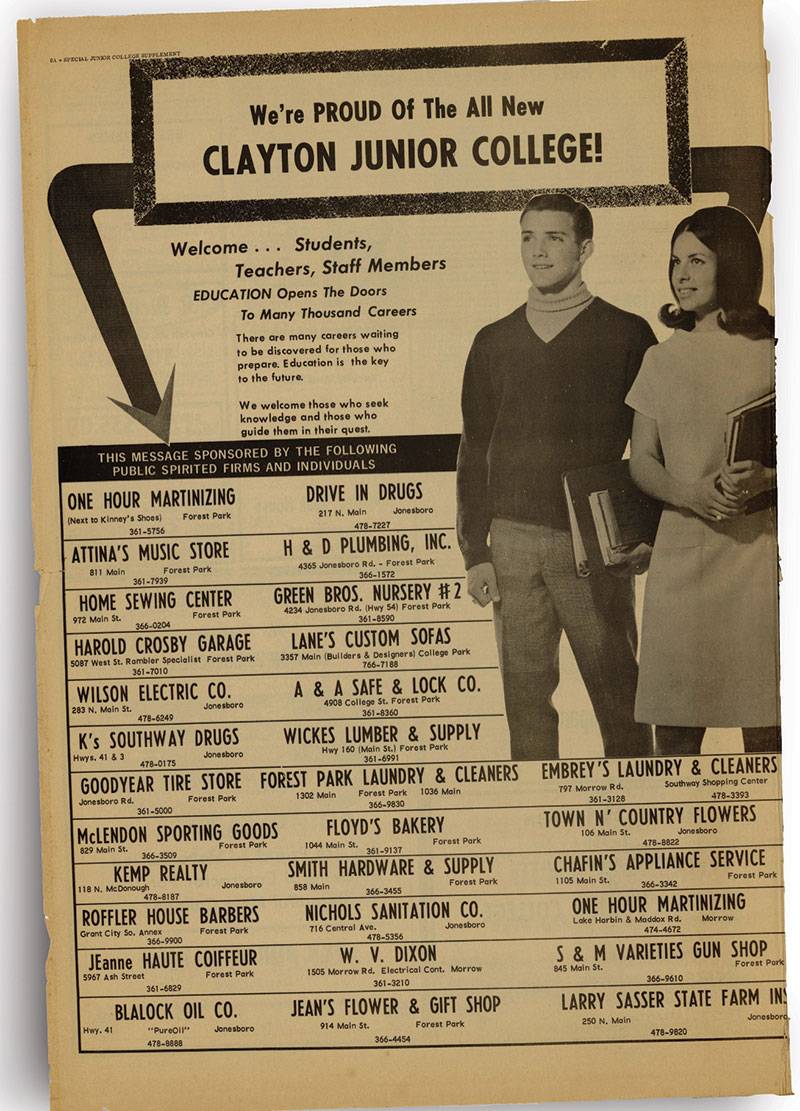 By February 1969, construction of Clayton Junior College was well underway. Chancellor George L. Simpson and the Board of Regents approached Dr. Harry S. Downs to ask if he would consider becoming Clayton Junior College’s founding president. “I was honored,” Downs wrote in the Fall 2009 issue of Laker Connection magazine.

On March 1, he set up a temporary office in Forest Park. Thus began Downs’ quarter- century tenure as president. A native of Conyers, Georgia, Downs had been a Navy fighter pilot in World War II, but his heart was always in teaching. Downs went on to become chancellor of the University System and later a Clayton State Athletics Hall of Fame 2016 inductee for bringing intercollegiate athletics in 1990 to what was then Clayton State College.

By 1969, four years after the Board of Regents’ recommendations, Clayton Junior College opened to offer students the opportunity to earn associate degrees in art and science, as well as a number of two-year programs in areas such as mathematics, and business administration that could lead to bachelor’s degrees.

The college also offered two-year professional programs in nursing and secretarial studies. The college’s core curriculum was designed so students who chose to later attend a four-year college within the University System could easily transfer their credits.

Downs, who died at age 91 in 2017, explained in the fall 2009 issue of Laker Connection that “the Board of Education that initiated the bond issue on which the voters agreed to fund the initial campus [for $4.9 million] was a much larger local contribution than for any of the other similar colleges.”

“The community support for a new college in Clayton County was far superior to other communities with which I had worked,” wrote Downs.

He was right. A special section in the Clayton News Daily announcing the new college praised the partnership between Clayton County and the University System and lauded the citizens for spurring a “grass roots, at- home coalition for a cause.”

Many local businesses—from a steakhouse to the local supermarket—placed ads in the newspaper to welcome Clayton Junior College to the city of Morrow. 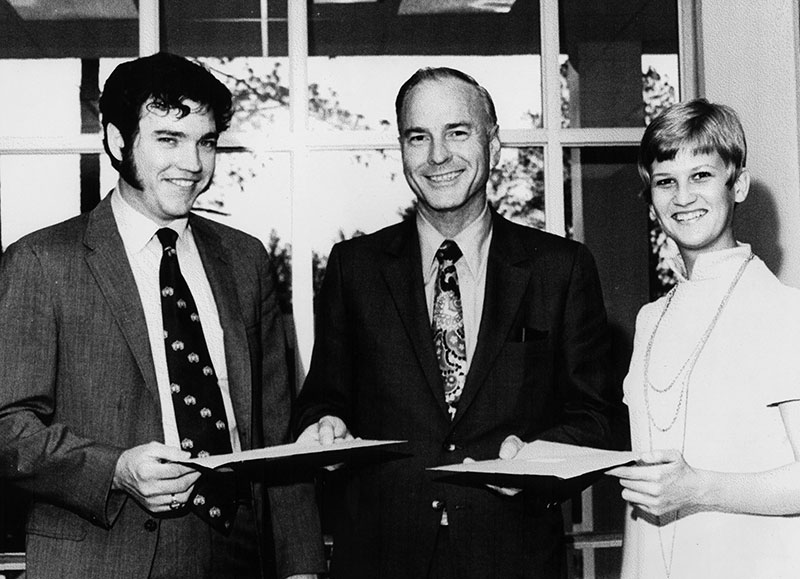 One week before the college opened, Georgia Governor Lester Maddox stated, “I am certain that in the years to come this institution of higher learning will prove an invaluable cultural, economic and industrial asset to Clayton County as well as to the surrounding areas. I have no doubt the investments you make now will be multiplied many times.”

His optimism has borne fruit.

It boasts 25,000-plus alumni and serves nearly 7,000 students each year. But more importantly, Clayton State continues to be a place where anyone can make their dreams real.