Artificial intelligence (AI) is no longer science fiction or part of a scientist’s dream. It is here and now. From Alexa to Siri to the Facebook app, AI has become part of our daily lives.

It was only six years ago, in 2011, that Apple introduced the beta version of Siri with the launch of the iPhone 4s. That same year, IBM’s Watson wowed audiences when he competed in Jeopardy!. He outperformed his competition to win the $1 million first place prize. In 2012, Watson attended medical school at Case Western Reserve University.

At the time, many could not have imagined the impact these events would have on the evolution of AI and machine learning.

Today, Watson is assisting physicians with patient diagnosis and identifying best methods of medical treatment. Meanwhile, Siri is connecting with her users, tailoring recommendations and responding to their individual needs.

These question-answering computing systems have revolutionized how information is accessed and how it is used. 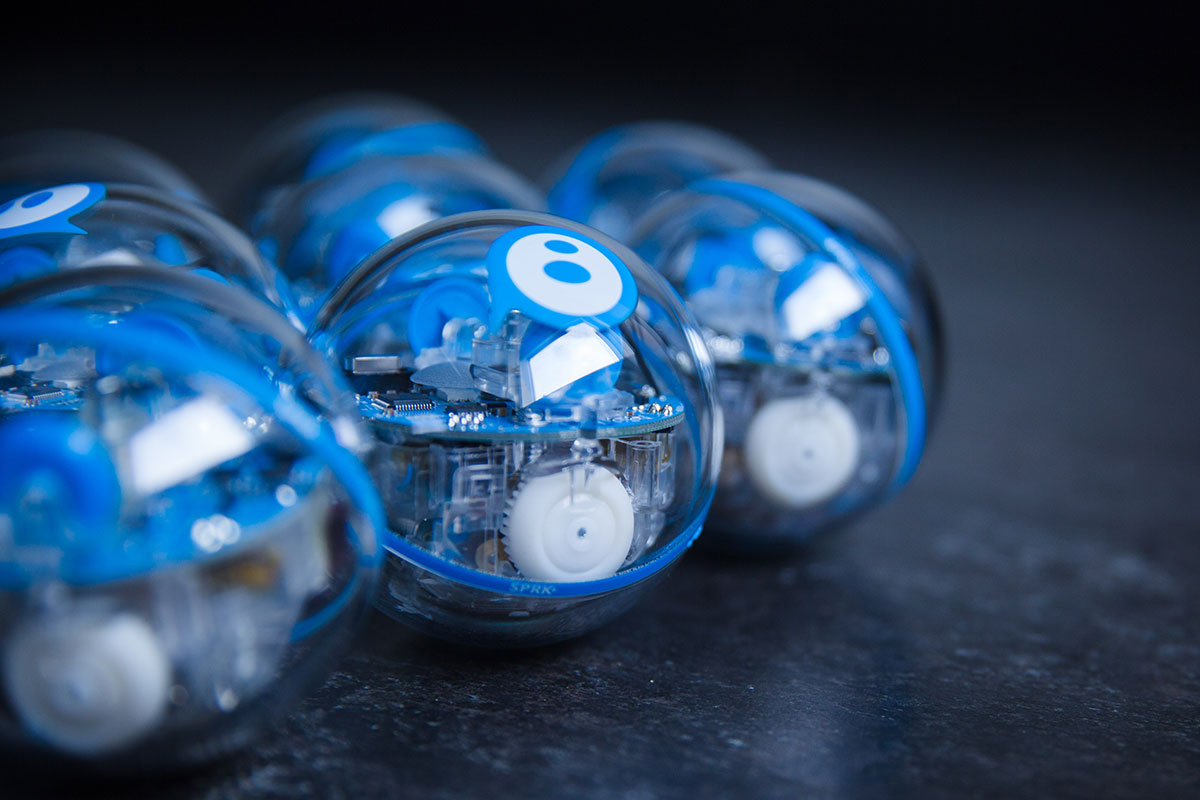 AI and machine learning dominate various aspects of our world, accelerating and improving human life. Large industries such as supply chain, marketing and communication, and healthcare are using AI to innovate their operations.

It is estimated that between 2020 and 2060, supercomputers will surpass human capabilities in most areas, according to Scientific American.

Whether it’s virtual assistants, smart cars, online customer support through chat bots, or smart home devices that can dim your lights or turn on your oven, artificial intelligence has already begun to seep into the daily lives of consumers.

“Applications of AI have the potential to affect many aspects of our lives; medical diagnostics, identifying terrorists from social media posts, intelligent digital assistants

To that end, Clayton State is taking steps to prepare students for this rapidly evolving technology and to be at the forefront of AI’s emerging influence.

Artificial intelligence is a branch of computer science that develops computers to simulate human-like intelligence and behaviors.

For artificial intelligence to operate, it must learn and develop dynamic algorithms, i.e. a sequence for a procedure or a series of actions a computer needs to solve a problem or reach a goal.

“The robots allow the learning process to occur outside the normal setting of a computer monitor and keyboard,” says Dr. Angkul Kongmunvattana, department chair for computer science and information technology. “When students can learn the basics of coding using their mobile phones and robotic balls, it shows that the learning process can be both valuable and fun.”

As coding skills increase, students are able to solve fundamental problems of robot navigation similar to that of the driverless car. The goal is for students to make connections between their projects and real world applications.

“The pure logical thinking and systematical processes that go into programming are amazing. Going through a stretch of work and coming out with something functional fills you with this sense of accomplishment,” says Ugonna Iheanacho, senior computer science major.

Besides Sphero robots, wheeled robots called Lego MindStorms, or the College’s Nao (pronounced “now”) humanoid robots are all used in programming classes, including upper level courses for research projects in the area of artificial intelligence. 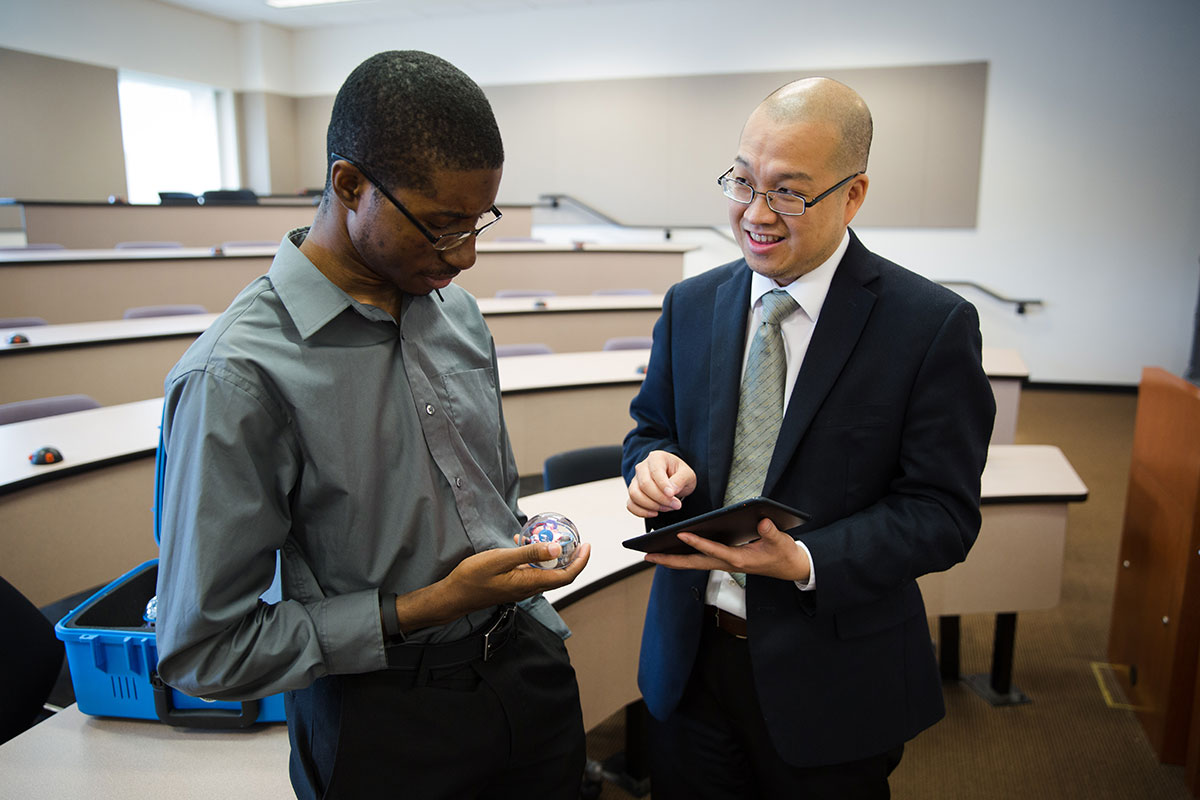 “AI is one area where the substance is truly worthy of the hype.” –Ken Simpson, enterprise product manager at The Coca-Cola Company. 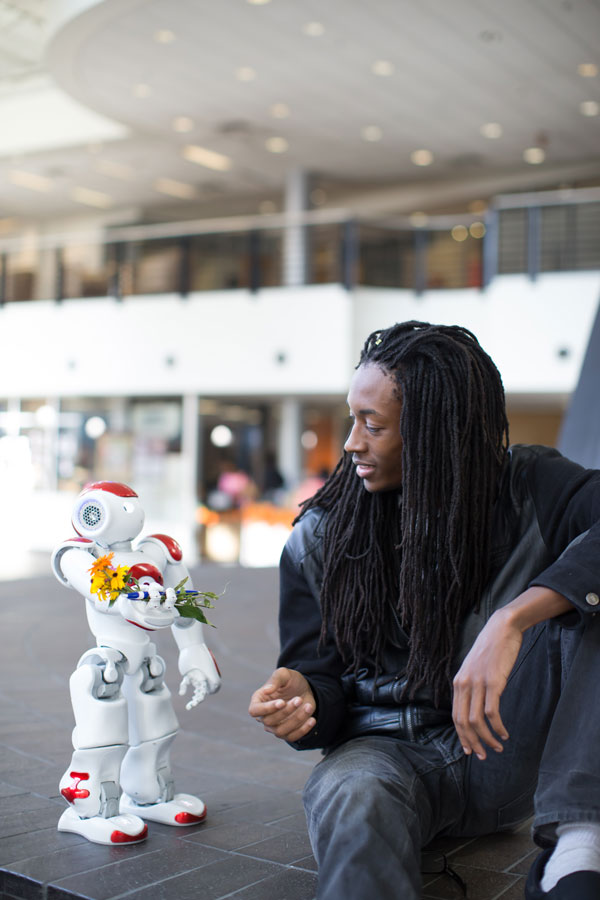 Clayton State alum Zee Lee Mannah ’17, was one of the first students to jump in and embrace learning the new humanoids a few years ago.

The Nao humanoid is equipped with two cameras as well as sensors that interpret the surrounding environment, like obstacles for walking or abilities to hand someone an object. The cameras also assist in facial and eye recognition.

“As with all new technologies, the initialization and configuration of the humanoids and their software dependencies proved some challenge,” says Mannah.

Mannah learned the complexities of artificial intelligence through the new humanoids, including voice and facial recognition, to create a project to demonstrate the robots’ capabilities to younger students at local public schools.

“I wanted to do something simple, fun, and relatable. The vanilla bot had some interesting default interactions, including a tai-chi dance, which most people found enjoyable,” says Mannah. “I thought it would be fun to develop a different dance routine, something more directly catered to younger audiences. I choreographed a dance to Migos' song Look At My Dab and had it trigger on the phrase, ‘Dab on 'em.’ It was a hit at every event and the kids couldn't get enough. I heard ’make him dance again’ over and over.”

Introducing robotics to younger audiences fosters an interest in STEM fields, which creates a pipeline for computer science to help meet the growing demand in programming skills needed among these career fields.

Coding skills are in high demand

Coding skills needed for AI are in high demand nationally. According to Fast Company, programming jobs are growing at a faster rate than market average, which include IT, data analysts, artists and designers, engineers, and scientists.

Programming skills are no longer just for those entering into IT positions.

To prepare students for this paradigm shift in the economy, Clayton State has developed a course that is open to all majors. New for the 2017-2018 academic year is the Computational Thinking and Coding course, which is a gentle introduction to computer programing that connects algorithmic thinking to concepts such as daily life routines.

"For example, we can start with a cooking recipe for making an omelet. Each step and its details in the recipe are the algorithm for making the omelet. The level of success by another person when attempting to execute your recipe depends on the level of details given in the recipe,” says Kongmunvattana. "This is also true in the computing world where good algorithms lead to the codes that function and produce correct outcomes. Using the robot as a medium for learning to code also provides students with intuitive feedback.” 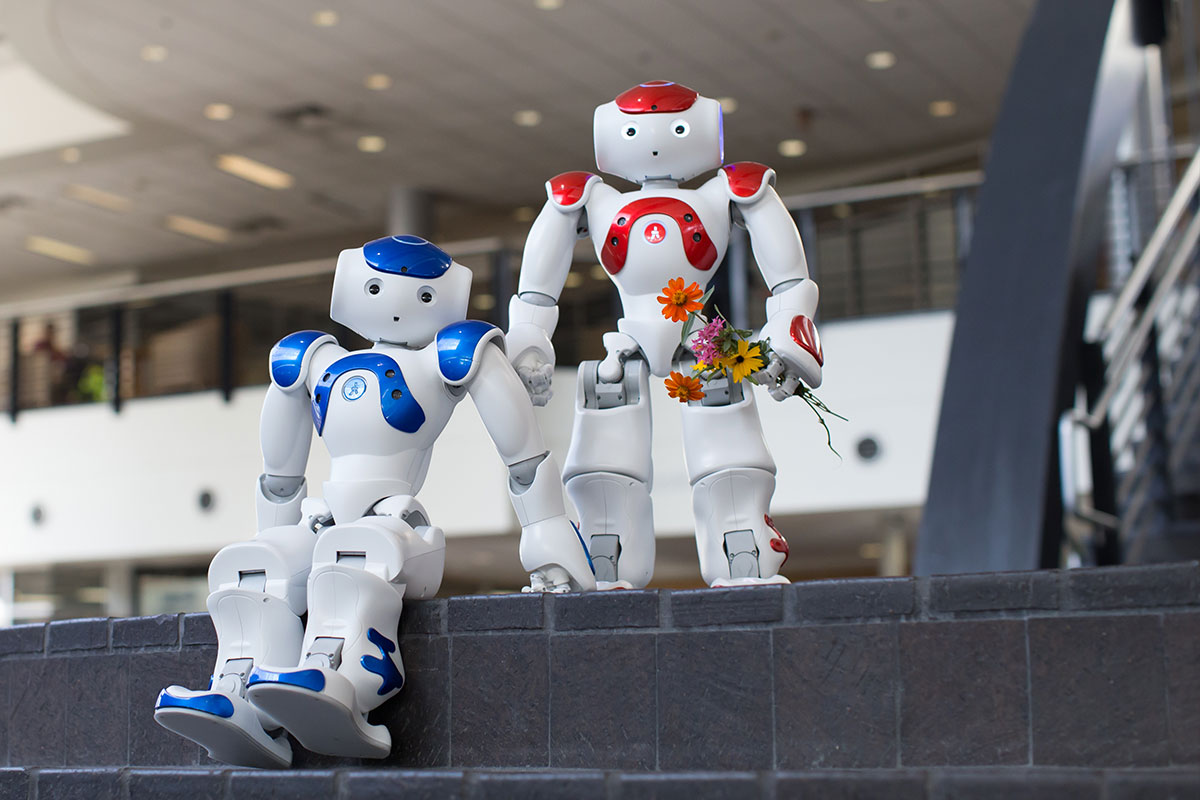 Future of AI is worthy of hype

The idea of computer and digital technology shifting how humans interact with machines, and vice versa, has found friends and foes on both sides of the debate.

At a meeting of the National Governors Association in July, Elon Musk, CEO of Tesla, argued that AI poses a great risk to modern civilization without some government oversight of the technology.

“People should be really concerned about it,” Musk said at the meeting. “AI’s a rare case where we need to be proactive in regulation, instead of reactive. Because by the time we are reactive with AI regulation, it’s too late,"

Musk went on to say, “AI is a fundamental risk to the existence of human civilization, in a way that car accidents, airplane crashes, faulty drugs, or bad food were not.”

Yet, for all the concerns about potential mass job losses in the manufacturing sector, or the worry that robots could turn on humans to do harm, researchers say AI has the ability to make vast improvements to human life to benefit everyone. 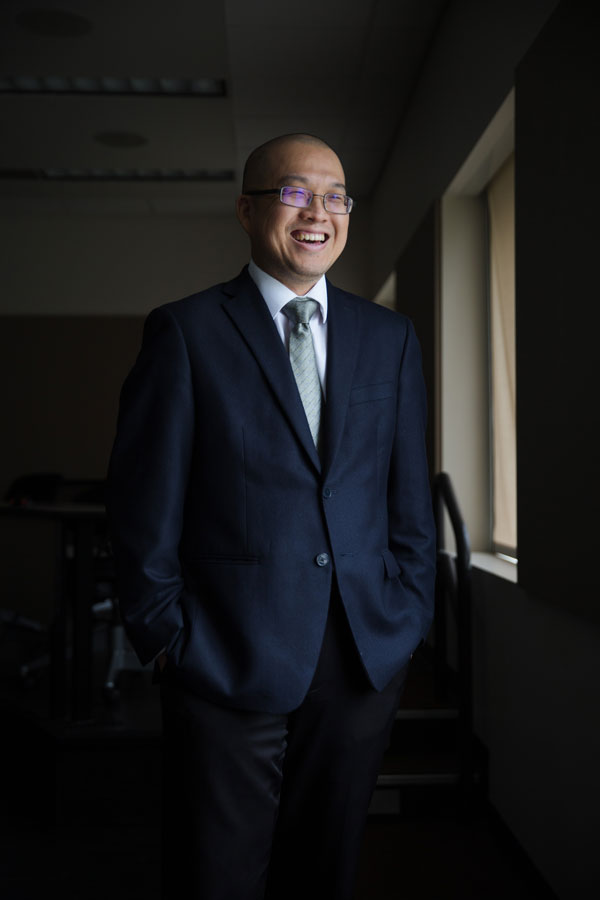 Pedro Domingos, professor of computer science at the University of Washington in Seattle, said in a 2015 National Geographic article:

“Machines can attend to vastly more information and more complex processes than human beings…In the short term, machine learning, like other technologies, will have winners and losers. In the long term, we will weed out the bad things and mainly have good consequences.”

As industry titans like Tesla, Amazon and Coca-Cola embrace artificial intelligence to shift how people conduct daily life, the global economy will continue to see tech startups populate and the need for developers rise.

“AI is one area where the substance is truly worthy of the hype. Given the scale at which Coca-Cola operates, efficiencies generated from AI have the potential to make significant impact,” says Ken Simpson, enterprise product manager at The Coca-Cola Company and member of the CIMS advisory board. “If you want a programming

skillset that can get you out of your desk chair and into a dynamic environment, robotics is the area for you.”

As artificial intelligence expands at an exponential rate and reaches into the deepest corners of our daily lives, the possibilities for the future are endless.