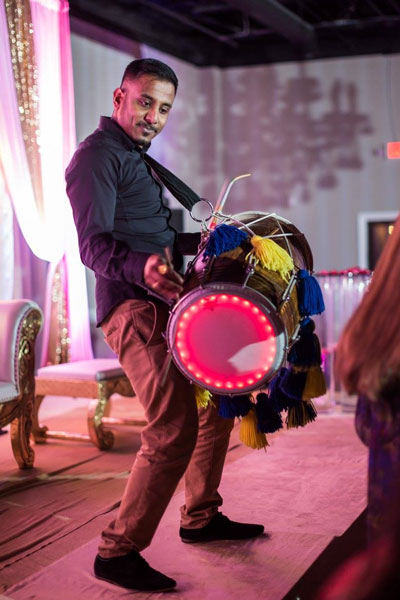 Dholi P is the stage name for Pritul Patel, a London native who mastered the traditional Indian drum, the Dhol, at an early age. He’s traveled around the world with his drum performing for the likes of Queen Elizabeth II and also at many events including weddings and concerts.

But Patel sought a new journey in America, and came to the states in 2008 to pursue higher education at Clayton State University in Atlanta, GA.

He was drawn to Clayton State because of the small and intimate classes, allowing him to establish a more personal relationship with his colleagues and professors.

And in 2012, Patel graduated with a Bachelor of Science degree in Mathematics with a minor in Business. He also earned a teaching position at Martin Luther King Jr. High School in Lithonia. When he is in the classroom, he finds that his family remains the number one inspiration for his teaching career.

“What drives me to become a better person and a better educator as a whole would be my parents and family,”

“What drives me to become a better person and a better educator as a whole would be my parents and family,” Patel says. “They have supported all of my endeavors, and helped me grow as a professional.”

Not long after taking on the teaching job at Martin Luther King High Jr. School, Patel found himself returning to Clayton State to work as an interim tutoring coordinator.

In addition to his tutoring, Patel also is completing a Master of Arts in Liberal Science (MALS) with a concentration in mathematics. He is set to graduate from his Master’s program in the spring of 2017. “I chose to return to Clayton State because I genuinely enjoyed the culture and environment here on campus. I have developed strong relationships with many staff and professors here at the University. Even though Clayton State is a 40-minute drive I feel like I am at home.”

Patel has had to make a few adjustments upon leaving his home country of England and living in the states. But he has come to appreciate the differences of living so far from home.

“One of the main things I appreciate about living here in the United States is the southern hospitality. People here are so welcoming and friendly,” Patel says. “The food, the weather and quality of life are amazing too. I am lucky I have been given this opportunity.”