Why Young People Could Determine the Next President

If the 2016 presidential campaigns are any indication, the most vocal candidates are deploying fierce social media strategies to stay on top of the daily news feed and in the minds of American voters.

Whether it’s a Twitter-generated #ImWithHer hashtag based off Democratic contender Hillary Clinton’s campaign motto or a flurry of Youtube videos coming from Republican challenger Donald Trump on the campaign trail, political teams are building a tribe of supporters through social media engagement.

"When the next president wraps up his or her first term, millennials will outnumber baby boomers, representing 34 percent of eligible voters."

Millennials (those born between 1981 and 2000) are almost as large of a percentage of eligible voters as baby boomers (the generation that came of age in the 1960s). But in the year 2020, when the next president wraps up his or her first term, millennials will outnumber baby boomers, representing 34 percent of eligible voters. Seniors will shrink to a mere 28 percent of potential voters.

Since President Barack Obama mounted the first social media campaign strategy in 2008, Facebook, YouTube and Twitter have become go-to channels for political teams to connect directly to millennials—and adults to a lesser extent—where they are more likely to discuss elections.

The Obama campaign interacted with voters on Facebook during his first presidential election and sent out voting reminders on Twitter. Most importantly, it used social media and its webpage to raise money.

Obama generated around $750 million dollars and attracted 66 percent of millennial voters in 2008 by his efforts. His Republican challenger, John McCain, fielded a more traditional campaign strategy that used some social media, but failed to garner traction with a diverse pool of millennials.

Since 2008, adults with access to internet increased their social media use from 29 percent to 76 percent. Nearly two-thirds of social media users actively engaged in political activism online. Presidential candidates at the time stepped up their online efforts, including Mitt Romney, who made it a central part of his campaign strategy unlike McCain in 2008.

Obama, who ended up winning a second term, maintained his followers well into his presidency. He held a Facebook town hall, published infographics about job creation and invited his wife to hold Q&A sessions on the official White House Vine page to change how the president interacted with the public.

The political strategists in this year’s election cycle are not shying away from traditional forms of media. Candidates still spend the bulk of their money on television advertisements since they can reach 87 percent of those over the age of 18 through that medium. And cable news remains the most common source of learning about the 2016 presidential election for all Americans.

But as the presidential election shifts from the nomination phase and heads to the November general election, so does the need to stay relevant in the eyes of voters, particularly the 18 to 34-year-old crowd that has made the biggest impact on candidate platforms as they demand action on issues ranging from immigration to police brutality to LGBT rights.

The candidates know that to clench the presidency, millennials and their use of social media as a public forum for the exchange of ideas plays an integral role in the electorate.

Newer forms of social media, including Snapchat, Instagram and the Facebook live feature, which was not around during Obama’s run, are giving candidates another platform and greater freedom to spread their message.

For the first time ever, Google launched a new feature that allowed candidates to post directly into search results by structuring their search engine so that presidential candidates could upload posts with videos, images or text.

The feature can be found on the right side of a page when a candidate’s name or platform is searched and gives campaigns the ability to directly answer questions or provide real time responses to hotly debated topics.

Social media could determine the next president

Trump appears to be garnering huge social media attention from his most loyal followers and ardent critics. The real estate mogul has made a name for himself for his bombastic tweets and his larger-than-life online personality.

Meanwhile, it is estimated that most of Bernie Sanders supporters will vote for Clinton this fall, while approximately 24 percent will vote for another candidate or will stay home.

Millennials once again have a chance to influence an election, despite typically having a low voter turnout amongst all generations. Sanders’ call for free health care and free college education appealed to young people.

Clinton must fold those ideas into her platform or select a vice-president that captures the spirit of Sanders’ campaign.

The larger question for millennials is how they will use their numerical clout. Will they be able to sustain their political participation in midterm and local elections to help push for policy changes that will reduce student debt and increase wages? Or will their demands clash with Baby Boomers who seek the sustainability of retirement programs?

For the second year in a row, Clayton State University students, faculty and staff got a chance to see up close the daily workings of state government.

The university participated in Clayton State Day in January at the Georgia State Capitol in downtown Atlanta. 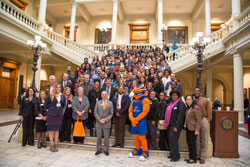 The group of more than 200 Lakers took a tour of the Capitol, spoke with legislators and learned about different jobs at the statehouse. A number of Clayton State alum that work in government agencies attended and offered valuable advice about the importance of chasing dreams.

As alum Bobbie Davis of the State Accounting Office said, “Whatever your major is, stay with it. Don’t let anyone deter you from your dreams.”