(September 7, 2018) - Clayton State University’s alumni offered insights into their relationship with the university and its alumni association, and what’s important to them as a member of the Laker family. 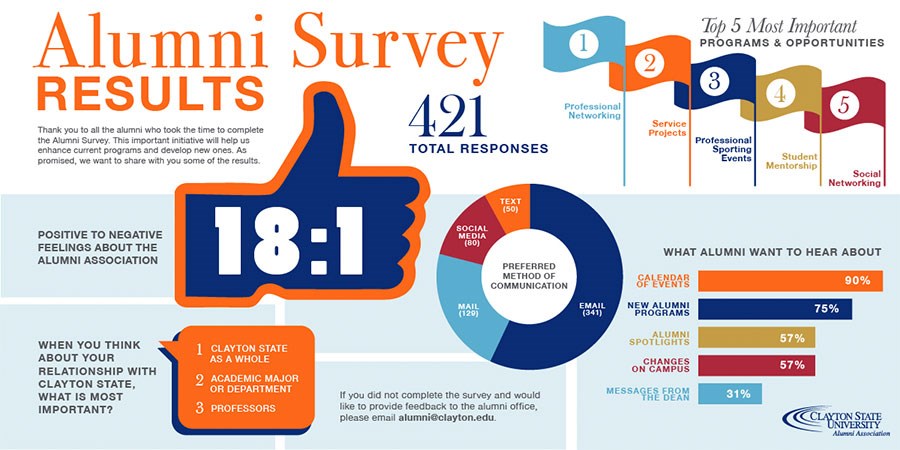 The Alumni Association recently released the results from a survey of Clayton State University alumni.

The alumni survey was conducted by the Clayton State Alumni Association through an online questionnaire and included responses from 421 alumni, ranging in graduation year from 1971, the university’s first full class, to 2017, the university’s most recent class at the time of the survey.

Associate Director of Alumni Engagement Michael Little notes there are a lot of pride points for the University and the Alumni Association that emerged from the data.

“Clayton State alumni have a lot of pride in their alma mater and positive feelings toward the Alumni Association, especially among those who have been engaged with the University since graduation,” he notes.

Results of the survey can be found below. The purpose of the survey is to provide the Alumni Association with data to be able to continue to improve and be more relevant to our alumni. Because of the responses from this Alumni Survey, the following actions will be or have already been taken:

Younger alumni, or those who graduated more recently, have a more positive view of the Alumni Association while those who received an associate’s degree and/or graduated prior to 2000 have a less positive, though not necessarily negative, view.

“There is an opportunity in a neutral response,” Little says. “We need to do a better job at demonstrating the value of being an engaged alumnus—the professional and social networking functions, the leadership opportunities, and the chance to give back with time, talent, and treasure to make a positive difference in your alma mater, the students, as well as the community.”

The Alumni Association continues to strive to provide meaningful, impactful programming for its members. Survey respondents were able to point the Alumni Association in a direction toward what they want most. The top five most popular answers to the programs and opportunities alumni most want are: professional networking, service projects, professional sporting events (such as Braves, Hawks, etc.), student mentorship, and social networking.

Additional results also emerging from the survey are alumni who received a master’s degree from Clayton State are more likely to attend an academic-specific event, African-American alumni are more likely to be interested in alumni travel programs, and alumni residing in Clayton County are more interested than other alumni in being involved with student mentorship and service projects.

“These results just go to further show that Clayton State alumni, especially those in the Atlanta metro area, care deeply about the future success of Clayton State and our students. They recognize the impact they can have on their community, and want to utilize the large network of alumni in this area—all while having a good time,” Little notes.

When asked what the most important factor is in their relationship to Clayton State, alumni responded the University as a whole, their academic department or major, and their professors. Lasting friendships from college was just behind those three, followed by class year, clubs/organizations, and athletics. Alumni also want to know more about the success of their fellow alumni. Respondents stated such updates have a great impact on the pride they have for their alma mater. By nearly a 2 to 1 ratio, respondents felt alumni success has a great impact on their pride.

Alumni were also asked to provide feedback on the manner in which they wanted to communicate with the Alumni Association. Given the choice of mail, e-mail, social media, and text message, a large number of alumni still prefer to receive their information via e-mail. This is true regardless of the graduation year, age, gender, race, and residence. Older alumni, maybe not surprisingly, do not prefer to communicate via social media and text messages, but do have the similar desire as their younger counterparts to receive information via mail and e-mail.

Almost all alumni want to receive a calendar of events from the Alumni Association and most of them also want information about new alumni programming. Additionally, a little over half of all alumni want to hear about updates on campus and receive alumni spotlights. Where alumni live also plays a role in these results: those who live outside the state of Georgia prefer receiving messages from the deans and updates on campus at a greater rate than other alumni, while they care less about receiving information on new alumni programs and a calendar of events.

Survey respondents skewed toward more recent graduates and more females; however, this represents the alumni population who is currently most engaged – attends events, volunteers, becomes a member, etc. Approximately 62 percent of respondents were 45 years of age or younger with 38 percent being over the age of 45. Of respondents, 61 percent were African American, 27 percent were white, and the remaining 12 percent were of other races or nationalities. When looking at location, 78 percent of respondents lived in the Atlanta metro area, 13 percent lived in another part of Georgia, and 9 percent lived outside the state of Georgia.

Little notes the alumni who responded to the survey is a key indicator of an opportunity on which the Alumni Association is can capitalize.

“Our engaged alumni are typically younger, received their degree—which was likely a bachelor’s or master’s degree—much more recently, and identify as African-American,” Little says. “We have a great group of new alumni who know Clayton State as a growing institution with graduate programs, residence halls, and thriving Student Affairs programming. There is a great opportunity for continued growth as we expand our programming to include both young alumni and students.

“However, we also have the opportunity—and I would argue responsibility—to further dive into what types of programming would engage our alumni who are older and those who received an associate’s degree in the Clayton Junior College years.”

Little thanks those alumni who completed the survey and notes the Alumni Association plans to repeat the survey in a few years to determine the progress that has been made and what new opportunities are on the horizon.