At 22, Clayton Carte already is making a name for himself in local politics. In 2019, the political science major earned the opportunity to chair a committee in Henry County charged with laying the groundwork for the next Special Purpose Local Option Sales Tax (SPLOST) referendum.

With the lessons his learning in his classes at Clayton State University, Carte hopes to continue to build his political ambitions to serve the public. 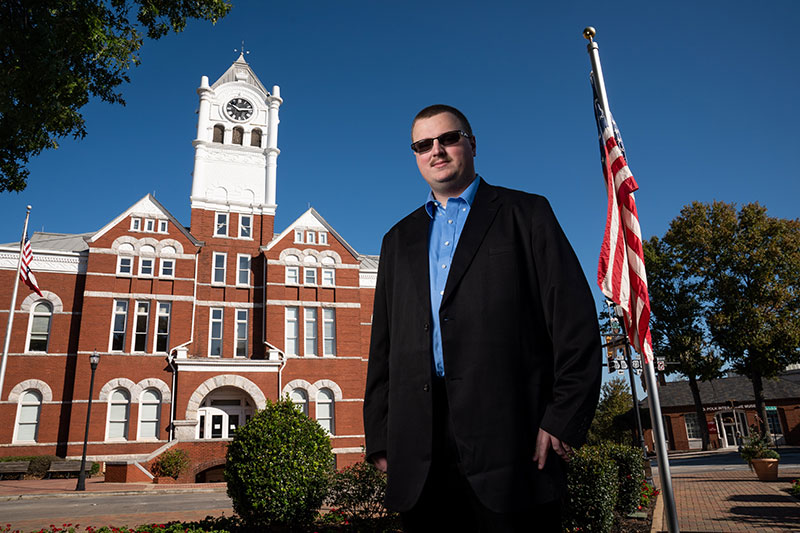 “When the opportunity to serve on the SPLOST committee came, I absolutely jumped on board,” said Carte, who plans to graduate from Clayton State in May 2021.

Counties in Georgia use SPLOST to pay for local projects. Henry County Board of Commissioners Chair June Wood appointed Carte to the committee, and members of the seven-person committee chose him as their leader. If voters approve a November referendum, the SPLOST will collect an estimated $204 million in Henry County over a five-year period.

This wasn’t Carte’s first foray into local government. At 18, he served on the Henry County land use plan update committee.

“I am most often the youngest person in the room by a longshot,” he says. Folks in Henry County became familiar with Carte through his transportation blog, “Moving Henry Forward.” The blog and its Facebook page, launched in 2017, has more than 6,400 followers.

Carte originally chose to go out of state for school, beginning college at Jacksonville State University in Alabama, 130 miles from home but transferred to Clayton State before his junior year.

Now Carte commutes about 30 minutes north on I-75 from his family home in Locust Grove to take classes at Clayton State, and he’s built some strong bonds with his professors.

“So far, I have met several professors that I have connected with who are potential resources in the future,” Carte says, citing in particular Dr. Augustine Ayuk in the political science department and Dr. Adam Tate, a history professor who also chairs the Department of Humanities.

“They’re not necessarily local government guys like I am,” Carte noted, “but I’ve really enjoyed their teaching styles, [and] they are really useful people I can talk to or collaborate with if I have questions or need assistance.”

Carte aspires to earn a master’s degree in urban planning and then land a job in transportation, planning for a position in “either a state department of transportation or a metropolitan regional commission.”

He sees himself “working with local governments on their transportation plans.”