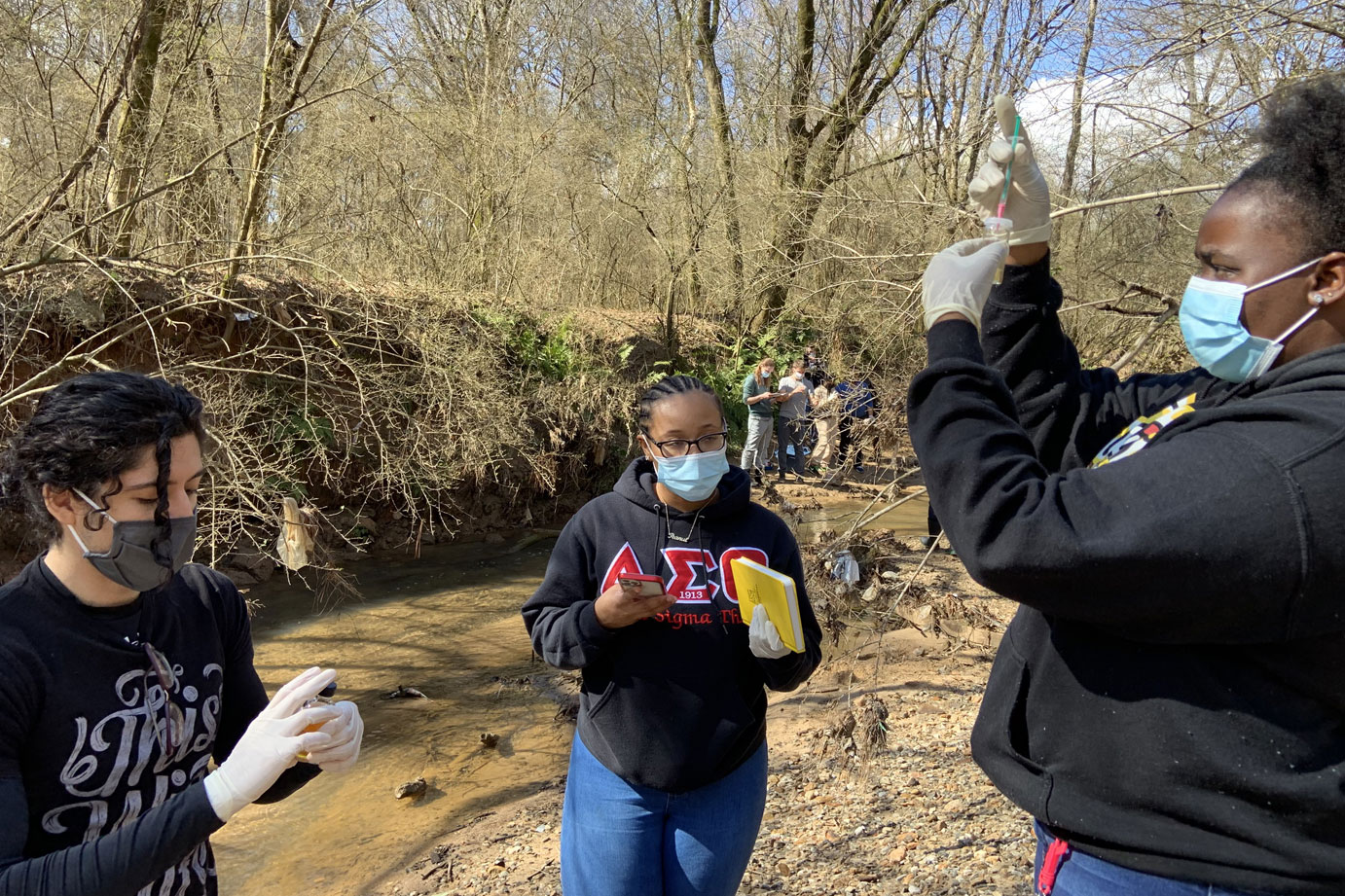 A River Runs Through It

“Now’s our chance to do it right, to do it in a way that’s sustainable for future generations.”

he Flint river’s span of 350 miles makes it the second longest river in Georgia just behind the Chattahoochee, which it eventually flows into as it heads south toward the Gulf of Mexico. Unbeknownst to most people, though, the Flint river runs directly under Hartsfield-Jackson International Airport.

Until recently, the Flint river was steadily vanishing under pavement as rapid development in and around the airport took precedent over the natural resource. But as Clayton County and the southside of Atlanta emerge as hotspots for 21st century redevelopment, the Flint river has been rediscovered as a vital water source for the metro area’s southside.

And Clayton State University looks to lead efforts to restore the river to its former glory.

“There’s just such a huge population that wants and needs access to nature,” said Hanna Palmer, coordinator for Finding the Flint. “And we do have nature right in our backyard; we just need a way to see it and enjoy it.”

Beginning as a tiny spring in East Point, Georgia, the Flint river winds its way down to the airport where it has been redirected into a series of pipes that lie under the jetways of the airport. It then flows out toward unincorporated Clayton County near the city of Forest Park and makes its way south across the entire county and down toward Griffin, Georgia.

Historically, the Flint river has always served as an impetus for development of south metro as it supplied water to farms and grist mills in Clayton County and led to the creation of railroad towns like East Point and Hapeville in the 1800s with rail line construction.

But an extension of runways for the then-Atlanta Municipal Airport as part of the Works Progress Administration (WPA) program and further industrial development well into the 1960s and 1970s caused the Flint river’s natural waterways to be further disrupted as headwaters were buried and channeled into pipelines.

As a result, flooding and contaminated water have become common in areas where the Flint river used to flow freely.

“In the Atlanta area, the river is not accessible and hardly even visible,” Palmer notes.

For Palmer, restoring Flint river is personal. The Forest Park, Georgia native, remembers the effect the airport’s expansion had on the local area.

“A lot of my community and places where I lived were negatively impacted by growth,” she says. “We moved many times trying to get out of the flight path.”

Fueled by these childhood experiences, Palmer sought out to discover more about the diminished communities surrounding the airport and penned a memoir, “Flight Path: A Search for Roots Beneath the World’s Busiest Airport,” in 2017. It was during research for the book that she found the Flint.

“Even though I had grown up in Clayton County, I had never been in the Flint river or visited it,” she recalls.

Learning that the river flowed under the airport surprised Palmer, who thought it “just sounded crazy and impossible.”

At the same time, the Atlanta Regional Commission partnered with the Conservation Fund and American Rivers to discuss ways to incorporate the restoration of the Flint river in its planning for the revitalization of area surrounding the airport through the Aerotropolis project.

Palmer joined in and created the name for the initiative—Finding the Flint.

Finding the Flint’s mission is to support a more sustainable, greener redevelopment of the Flint river and the communities through which it flows.

Palmer says the value of restoring the river is threefold.

First, efforts to improve and maintain quality water from the river is essential since the Flint supplies potable water to parts of Clayton, Fayette and Coweta counties. As more businesses and residential communities move into the southside, these developments will need to rely on a stable water infrastructure.

Second, the Flint serves as a wildlife corridor that is dependent on accessibility to natural resources.

“Even inside the airport, we’ve seen beavers and bobcats,” Palmer says. “Parts of the river flowing through airport property are like a nature preserve almost. You can’t even see it, but the animals know where the water is and follow the trail.”

Lastly, the revitalization of the Flint can be an economic generator and improve property values for land in and around the river. Palmer says repurposing the land to create walking trails and recreational hot spots can transform the greenspaces into multiuse connectors between communities.

“It could be sort of like the Beltline in that it’s a new waterfront for Clayton County—a place where you want to be not just because it’s full of birds and trails, but it adds value to property that is a flood plain or backdoor to industrial sites,” she says. “[We’re trying] to bring a new sense of destination to the airport area that’s really been degraded over many, many decades because of industrial growth.”

Repairing the Flint river won’t be easy. To achieve Finding the Flint’s green vision for the river and its surrounding communities, the water needs to be tested to understand what’s in it and to create a baseline of data that can be used for future planning.

Stream sampling is often done through volunteers of Georgia’s Adopt-A-Stream Program. But Palmer says the challenge to those efforts is manpower and time.

After meeting with Dr. Aubrey Dyer, associate professor of Chemistry, through one of the training sessions for neighborhood water quality testing, the two teamed up to develop a partnership that could provide the volunteers needed to collect and analyze water samples, while also giving Clayton State’s chemistry students hands-on research experience.

With Clayton State at the helm, stream samples can be collected and tested consistently to provide a full picture of the Flint river’s water quality in the southside.

For the last year and a half, Dyer has worked tirelessly to develop the Flint river water quality project. Initially in the fall of 2019, Dyer focused on learning how to select sites for testing, how to collect and store samples and what markers should be analyzed.

A UCARE grant from Clayton State’s College of Arts and Sciences and permission from the University of Georgia to use their water testing equipment allowed her to conduct some initial testing of the South river, which is located about a half a mile from the Flint river in East Point.

By summer of 2020, Dyer secured her own water testing equipment with the assistance of Clayton State’s Division of University Advancement and External Affairs, marking the beginning of a water testing lab housed at the university.

“Dr. Dyer has done a tremendous amount of work to try to bring focus to the southside of Atlanta to cleaning up the water systems and bringing awareness,” says Kelly Jackson ‘20, who worked closely with Dyer in the beginning stages of setting up the water quality project. “I do now consider myself a water conservationist.”

Chemistry students are tasked with collecting water samples that can be tested for heavy metals, nutrients like nitrogen and phosphorus and any biological activity. Data is collected on PH, conductivity and temperature.

Dyer says the main lab instrument, an Inductively Coupled Plasma Mass Spectrometer or ICP mass spec, is a high temperature torch used to blast a sample to look for metal emissions, measure the mass of the sample and quantify how much metal is present. The instrument is used by both the Environmental Protection Agency and Centers for Disease Control and Prevention.

“The water was just really an eerie blue color and it’s been going on for over 30 years, Dyer says. But no one knows for sure what it is. There are a lot of theories, but we haven’t figured out the cause.”
– Dr. Aubrey Dyer, associate professor of Chemistry

Once tested, collected data from the stream samples can be added to the Georgia Adopt-A-Stream database that is accessible to anyone, including the Georgia Environmental Protection Division (EPD), who wants to know where the hot spots are that need to be monitored.

Early data on the South river samples collected the previous year show a PH of 4.4, which Dyer says is equivalent to the acidity of tomato juice or Dr Pepper. And the part of the South river that was tested near a neighborhood had a strange appearance.

“The water was just really an eerie blue color and it’s been going on for over 30 years,” Dyer says. “But no one knows for sure what it is. There are a lot of theories, but we haven’t figured out the cause.”

Most recently, Clayton State students have been collecting samples from Mud Creek, a 12-acre property purchased by the Clayton County Water Authority from Finding the Flint  that’s located near I-75 in Forest Park. Mud Creek is one of the Flint river’s tributaries.

On one of their sample collecting trips, students waded through the creek testing the water and gathering some of the small trash items that floated into the river.

The success of the testing could mean the future development of a full-scale lab and water resource center at Clayton State.

“My hope is that we can be that bridge, be the scientific expert that helps the community,” Dyer says. “I want to supply the community with a [full] picture of what’s going on with the water.”

Partnerships with local governmental agencies like the Clayton County Water Authority will allow for the exchange of data so they can develop strategies to treat the Flint river, Dyer notes.

For Palmer and Finding the Flint, the data will give them the evidence needed to apply for and secure grants from the Georgia EPD to do restoration work.

“We can say exactly what our metrics are,” Palmer says about the grant process.

In the long term, Dyer hopes Clayton State University can serve as a water quality testing lab for the south metro region like the resource centers found at the University of Georgia and University of West Georgia.

She has already begun discussions with other institutions including Georgia State University, Georgia Tech and Emory University about the multidisciplinary nature of the Flint river water quality project. And she hopes to create opportunities for public school students in Clayton County to gain awareness of environmental health.

Palmer says revitalization of the Flint river can reverse years of development that was not conscious about stormwater issues and downstream pollutants.

“We’re the generation that has to figure out how to do both—how to grow this city but grow it in such a way that there is enough water for everyone and how to ensure the water is clean and safe,” she says. “Now’s our chance to do it right, to do it in a way that’s sustainable for future generations.”