A unit of the University System of Georgia where dreams are made real, Clayton State University is located 15 miles southeast of downtown Atlanta.

Clayton State University cultivates an environment of engaged, experienced-based learning, enriched by active community service, that prepares students of diverse ages and backgrounds to succeed in their lives and careers.

Through a distinctive combination of proven and innovative methods of teaching and learning, Clayton State University excels in preparing students from many walks of life to meet the challenges of living and working in a dynamic, global society.

Clayton State currently has more than 40 undergraduate majors in the Colleges of Arts & Sciences, Business, Health, and Information and Mathematical Sciences. The University’s School of Graduate Studies has nine master’s degree programs.

Clayton State’s diverse student body currently has in excess of 500-dual enrolled students among the University’s total enrollment of more than 7000. However, the average age of the student body is 28, evidence of Clayton State’s long-standing reputation as the region’s foremost provider of higher education to non-traditional (age 24 or greater) students.

In addition to the main campus in Morrow, Clayton State also has an instructional site in Peachtree City, Clayton State – Fayette, and holds undergraduate classes in Henry County at the Academy for Advanced Studies in McDonough.

Complementing Clayton State’s academic programs are a thriving continuing education program and the College of Business’ Small Business Development Center (SBDC), which provides one-on-one counseling to new and existing businesses in Clayton, Fayette, Henry and Spalding counties. Highlighting the Continuing Education programs is the Film and Digital Media Center, and its new $300,000 sound studio at Lucy Huie Hall on Tara Boulevard in Jonesboro. Whether students’ career path extends toward working on-set, off-set, or in other areas related to Georgia’s growing digital entertainment media industry, the Film and Digital Media Center, under the direction of nationally-renown industry expert Barton Bond, will get them on that path.

Clayton State University opened in 1969 as Clayton Junior College, with Dr. Harry S. Downs as the founding president. The Board of Regents of the University System of Georgia elevated the institution to baccalaureate status (as Clayton State College) in 1986, to university status (as Clayton College & State University) in 1996 and approved the present name on May 18, 2005. On November 16, 2005, Clayton State’s first graduate level program, the Master of Arts in Liberal Studies, was approved by the Board of Regents of the University System of Georgia. Following the retirement of Harry Downs in January 1994, Dr. Richard A. Skinner became the University’s second president, to be followed in 1999 by Interim President Michael F. Vollmer. Dr. Thomas K. Harden became the University’s third president in June 2000 and Dr. Thomas Hynes was initially named interim president in May 2009 before having his appointment as fourth president made permanent in February 2010.

Clayton State University, where dreams are made real, is an empowering experience, an inclusive diversity, an engaged and experiential preparation and a supportive community for its 7,000+ students enrolled in degree credit programs that, in the words of the University’s mission, provide “career-oriented education with a solid liberal arts foundation.”

In addition to growing academically, Clayton State has brought several significant new facilities on-line in the past 10 years. The James M. Baker University Center, Clayton State’s signature building, was completed in August 2004 and provides the University with a true “Center” for student life.

In a six week period between August and October 2008, the University dedicated three new buildings; the University’s first student housing, Laker Hall, the Student Activities Center and a new building for the AACSB-accredited School of Business. In January 2011, the University opened the Laboratory Annex Building and, in November 2013, broke ground for a $19.8 million science building that is expected to open in August 2015. Clayton State - East, located on Trammell Road, provides newly-renovated space for University departmental offices as well as additional classroom space. In addition, instructional sites in Fayette and Henry counties provide outreach to neighboring communities.

President Hynes’ tenure at Clayton State has featured the University putting into action a comprehensive strategic plan and its first brand campaign, “Dreams Made Real,” being ranked third among state universities in economic impact by the University of Georgia’s Selig Center for Economic Growth, and fifth among public regional colleges in the south by U.S. News & World Report, and being called a “treasure of a Georgia university” by James magazine. Hynes has also overseen the doubling of the University’s on-campus residential housing, a record enrollment, and the establishment of growing partnerships with the Clayton, Henry and Fayette public schools; all initiatives that track to the new strategic plan.

Clayton State has also achieved acclaim outside of academics. In 1991, Clayton State opened the doors to the finest small performance facility in the southeastern United States, the nationally and internationally-renown Spivey Hall. 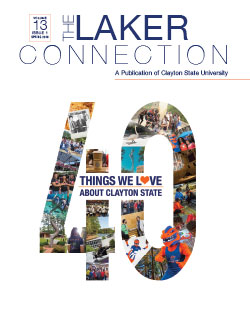